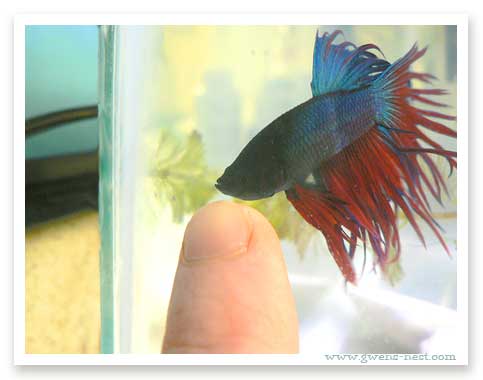 there was a baby here just a second ago!

To pick up where I left off from the last betta fishpost:  Daddy Betta, aka Mr. Darcy, was vigilantly watching over his little bubble nest and eggs.  He was pretty bored, because watching eggs isn’t that stimulating.  But he was keeping his eye out for the annoying frog, and anyone else who threatened his future fry.The mating happened on Monday morning, so on Sunday morning, I ran downstairs to see if we had babies yet. 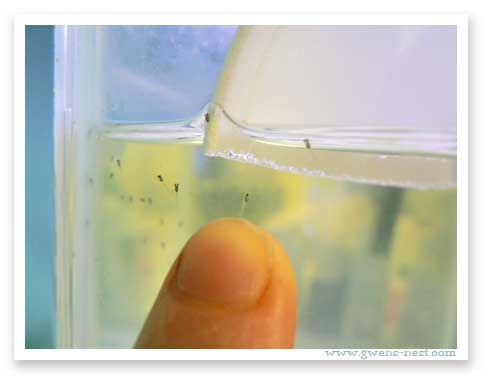 They were so, so, so, so tiny!
All the sudden, Mr. Darcy’s Daddying gig got a little crazy.  These newly hatched little ones, called fry, didn’t have any sort of flotation device yet.  Their air bladder doesn’t develop until day 2 or 3, so they just hang there wiggling in the bubbles for a couple of days.
Let me rephrase: ideally, they hang in the bubbles.  But you know how kids are…with all that wiggling, they’d inevitably fall out of their nest, and float down to the bottom.
Darcy would dart down after the little guys, and scoop them up in his mouth.  Then he’d return them to the surface, and blow a few more bubbles.  He was a very busy guy, since the babies were very wiggley, and he was pretty short on bubbles by this time.
Full Disclosure: This post may contain affiliate links. We are a participant in the Amazon Services LLC Associates Program, an affiliate advertising program designed to provide a means for us to earn fees by linking to Amazon.com and affiliated sites. Disclosure Page 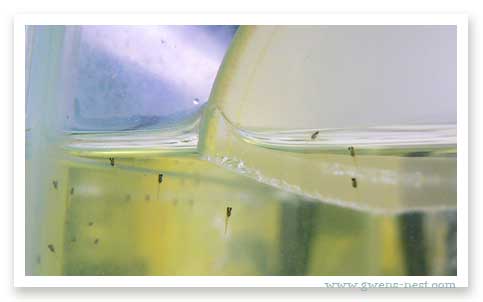 It was fun to watch him darting back and fort, gathering his fry in his mouth…they seemed to be falling constantly, so he was very, very busy.  Sometimes, his mouth would get so full that little fry would come shooting out of his gills, and he’d have to go catch it again.Mr. Darcy is very, very protective of his babies.  I was trying to photograph one of them that was clinging to the side of the tank, and had my finger there to show scale.   Just as I was about to snap the photo, Daddy Betta swam up and snatched him off the side.  (top photo)

Betta’s natural habitat is shallow streams and rice paddies in the Philippines.  So, the water needs to have a good bacterial mix…the new babies actually live off of the bacteria that break down plants at first.
By day 3, the babies were doing a lot less ‘hanging’ and more swimming, so Daddy was returned to a smaller tank with our frog.  Once the babies start swimming, they become food…adult Bettas eat anything that moves quickly.

The babies are growing quickly.  Here is a photo of one of the little guys at one week old, hiding among the plants. 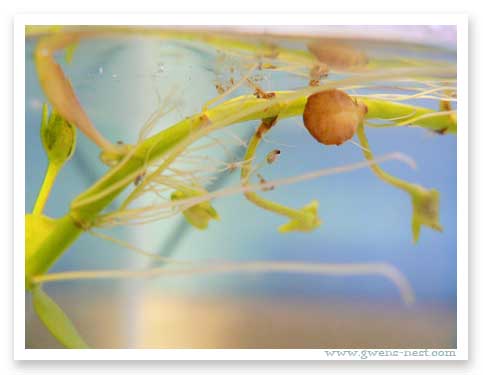 can you see him?
The babies stay very, very still most of the time…probably a defense mechanism to keep from being eaten.  When they do move, though, it’s as fast as lightening.  It’s amazing how fast they can scoot!   Wanna see a one week old Betta fry closer up?  So did I! 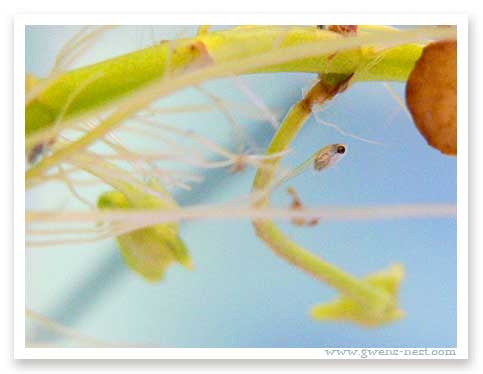 This is way more detail than we can see with the naked eye!
I’ve really enjoyed watching and trying to photographing these little
guys with my old point-n-shoot.  The focus mechanism is getting cranky
on my camera, so this shot was a rare fluke…I can’t believe my camera
focused this well on something this tiny!

This is week 3 with the babies, and they are growing so quickly.  Some of them look more fishlike, and less like tadpoles now.  We have begun to notice that some are darker than others.  Several of the babies are slower in their growth…we’ve been marveling at how they seem to be developing at different rates.

Next time, I want to give you a closer look at Lizzy…she’s a lovely and fascinating gal with how she can change her stripes to tell us things!

Do you have any questions about our bettas?   Let us know in the comments, and I’ll let the kids research and answer your questions. 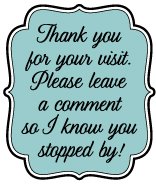