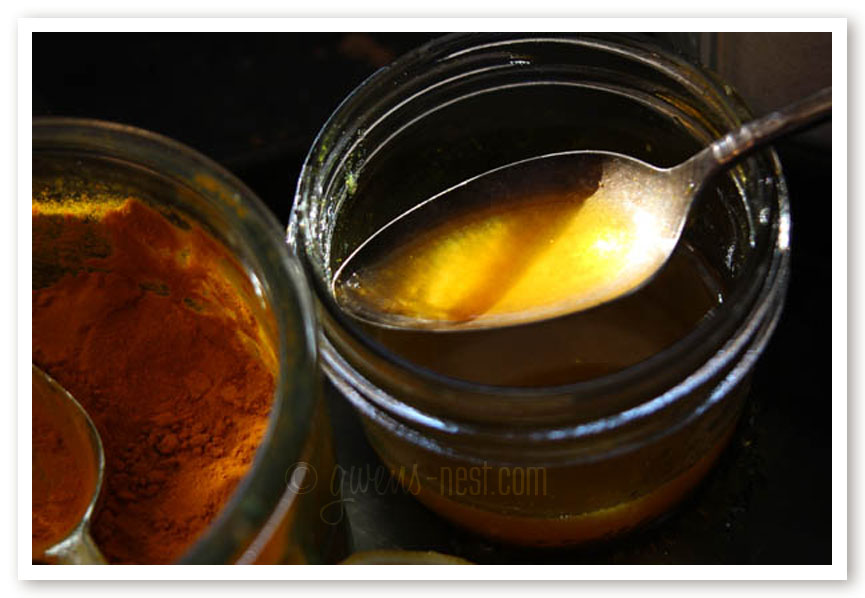 If you’re thinking this cough remedy recipe looks familiar, then you’re right!  It’s actually the same picture that you’ll see in the cough and cold remedy post, but for good reason.  You start with that recipe as the base. After you make up the honey, lemon, ginger mix put together, you’ll just need two more ingredients to turn it into a really great cough kicker…and you may already have these ingredients in your spice cabinet!

Worst case scenario, you’d have to go to the local grocery store to pick them up…but you won’t need to wait for something to be shipped from the far corners of the earth.  Convenience is key when you’re not feeling good. 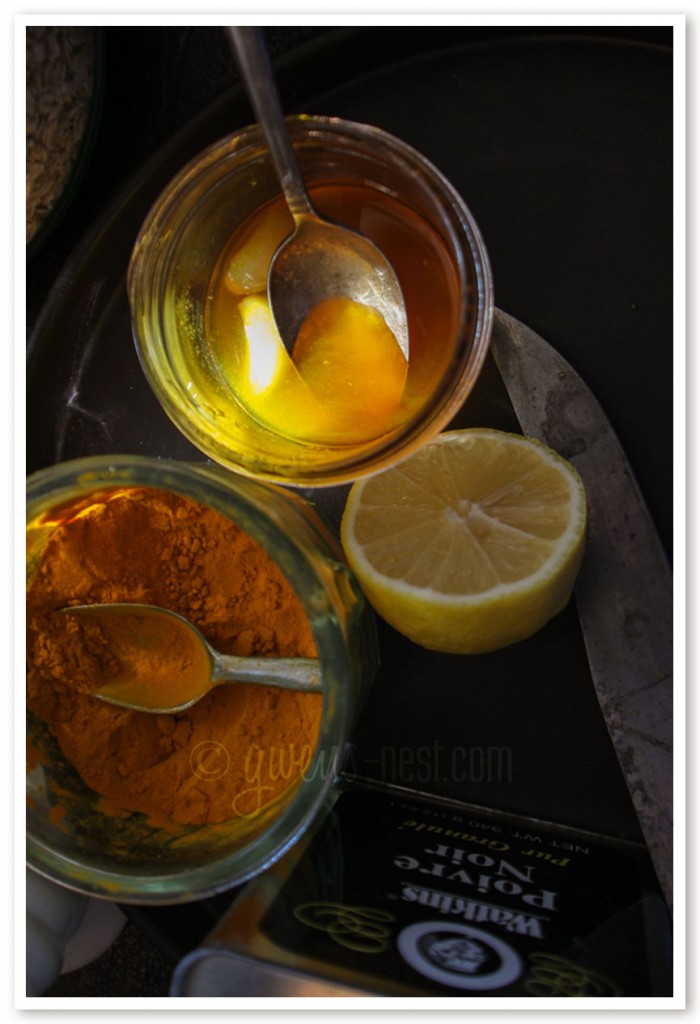 The first thing you’ll need is turmeric.  It’s really a wonderful spice, and I wrote a long post about it here and a really short one here.  They’re part of the ‘remedies you may already have in your kitchen‘ series.

Turmeric has a warm, peppery flavor, and is one of the key ingredients in Indian curries.  It is an anti-inflammatory, and a histamine blocker.  So if your throat is swollen and irritated, it is a great pick.  You may remember that I wrote about using turmeric in the series on Whooping Cough.  It was amazing how quickly this humble herb quelled a terrible cough that had been plaguing my kids for weeks!

Another thing you should know about turmeric.  It is *yellow*.  And anything that touches it is yellow, from henceforth and forever.  It is actually used as a dye.  (I have gotten it out with Oxygen Bleach stuff, but I don’t recommend getting on clothing that you plan on keeping!)

If you’re stocking up, then I recommend getting the organic turmeric powder here from Mountain Rose Herbs. (affiliate link) 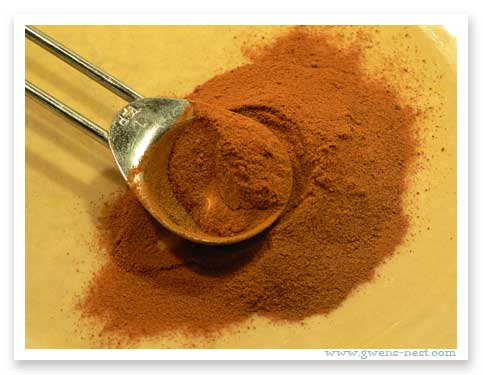 To about one cup of your base recipe, add 1-2 teaspoons of powdered turmeric.

And there is one more secret ingredient that you want to add to your cough remedy. 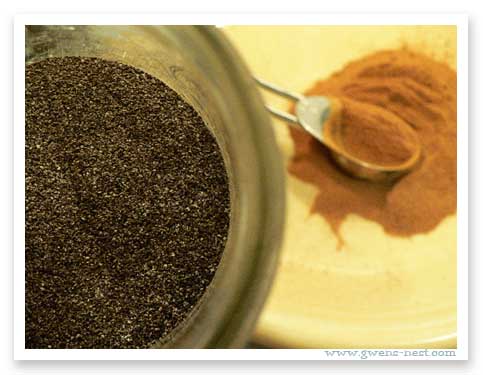 Just a pinch has an amazing effect on your body’s ability to metabolize and absorb turmeric.  Black pepper increases your body’s ability to absorb turmeric by 2000%.  That’s not a typo!  Two-thousand percent.That is significant.
(References for the study on this are in the longer article above.)Admittedly, this combination is not as tasty in a sugary, lemony, nummy way.  It takes on more of a savory flavor when you add the turmeric.  But my crew tolerates it well, and definitely see a difference in using it.  In fact, my toddler really, really liked it, and would ask for it often. 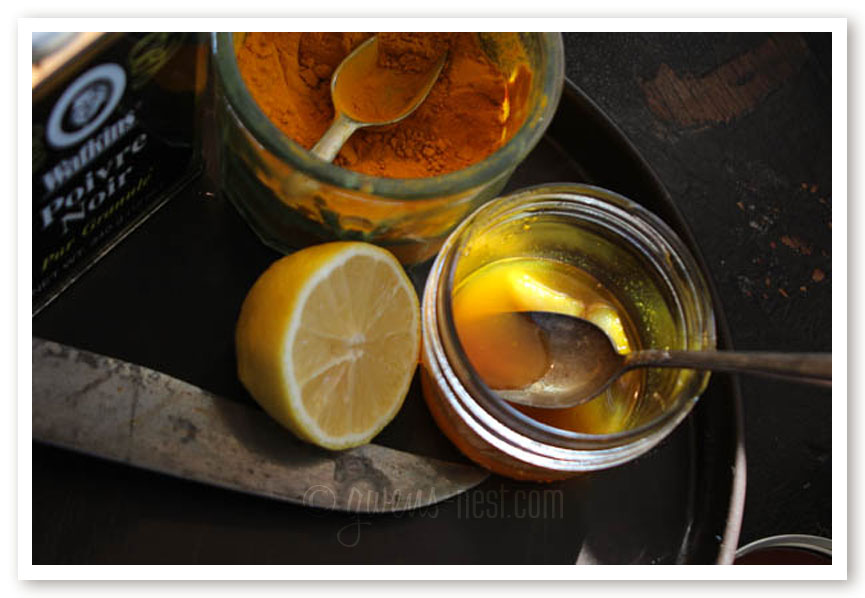 Dosage:  Once you’ve stirred in the turmeric and a pinch of black pepper, use just a spoonful as often as needed to calm coughing.

Alternative:  If your kids refuse to touch the turmeric, then you can sub cinnamon in the recipe (and omit pepper).

Warning:  Children under a year old should not be given honey.  If you have a little one, then use maple syrup as an alternative base for this syrup recipe.

Print
Author: Gwen
Recipe type: Herbal and Supplement Recipes
Ingredients
Instructions
Notes
!How to take it:
Take a spoonful of honey as needed, avoiding the chunks of garlic and ginger unless you just reeely like the taste of garlic. !Keeping it going:
We keep the mix going as long as we have colds in the house by adding more honey and lemon to taste. I also refresh the cloves of garlic and ginger daily, removing the old ones with a fork, and adding new ones. Add a t. of turmeric and a dash of pepper when you do a major refill. This keeps in the fridge for several days, but I toss it as soon as we start feeling better, and make up a fresh batch for the next time we need it. !Tip
I love the taste of fresh ginger, so whenever I buy some for a recipe, I will chunk up the rest of it into one inch pieces and freeze it for using in remedies or for cooking.
I also buy bulk peeled garlic cloves, and keep them in my deep freezer. I keep a smaller container of them frozen in my kitchen freezer for convenience.
If you're lucky enough to have good, multi-cultural grocery stores in your area, you may be able to find fresh turmeric root, which is really delicious! It's got a lemony-gingery flavor. It also keeps well in a sealed container in the freezer.

Wordpress Recipe Plugin by EasyRecipe
3.1.09
Have you tried this cough remedy with turmeric? I want to hear about it in the comments! 🙂