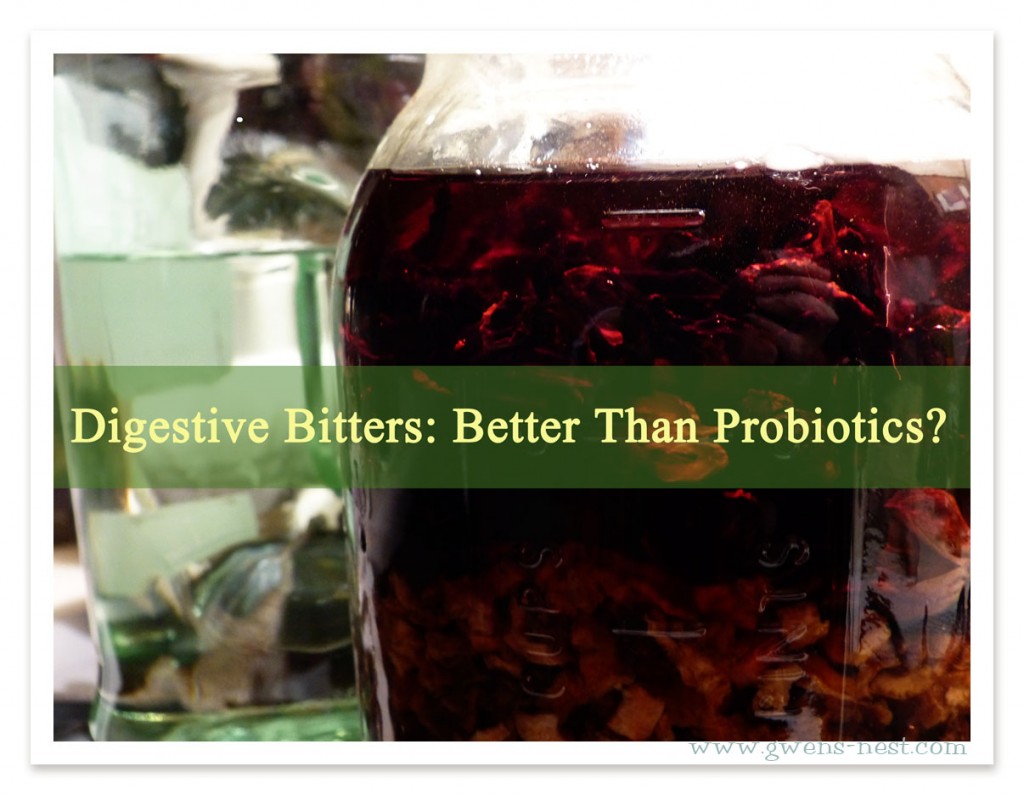 Digestive bitters were on the top of my “mad scientist” list this year…I had SUCH fun tinkering in the kitchen with my bitter herbs!  If you’re wondering why I would even be interested in using things that taste nasty and bitter, I’ve got some COOL stories and info for you.Got tummy issues? Potty issues?  Rumbly or uncomfortable digestion?  Eczema and food sensitivities?  This post is for you…you need to know about digestive bitters!

If you’ve got digestive issues, you’ve probably heard a lot about enzymes and probiotics.  If you use expensive probiotics and enzymes to assist your digestion, then digestive bitters are WORTH looking into.  They are, in my opinion are a BY FAR a better long term option than probiotic powders or products.

[bctt tweet=”Digestive bitters were on the top of my “mad scientist” list this year…https://gwens-nest.com/?p=1531″]

Today, let’s have a quick talk about bitter taste receptors, and then talk about what bitters are and what we think they do…and you’ll get to hear some cool stories about what they’ve done for me and for a few of my friends!

I guess you could say it’s a BITTER end to the summer here on Gwen’s Nest.  (Wonka-wonka!) I’m telling you…it’s ALL fun and games here, people.  But I promise you…this is really great info, and I’m excited to share this with you. 🙂

Let’s dive in with a little review from grade school:

Remember in grade school, when you studied taste receptors?  And different students were picked to be blindfolded in front of the class, as the teacher gave you bites of different foods, and you got to proclaim, “salty!” or “sweet!”  And when it was your turn, and you were blindfolded, your teacher shoved a GIANT soup ladle full of sour cream into your mouth?  And everybody died laughing as you gagged for your life?

But back to bitter taste receptors…remember those?  They’re the taste buds that specialize in specific flavors, and are located in different zones on the tongue, like this:

But I swear, y’all, I could taste that ladle full of sour cream ALL OVER my tongue. And there’s a reason for that: the tongue zones are a myth that I was taught as a fact in science class. But I digress.

Today, we’re going to just focus in on the bitter taste receptors.  Those little guys that they *thought* just lived way in the back.

If you’re like me, you’ve probably spent your whole life trying to avoid stimulating those bad boys.  Bitter stuff (and sour cream in large amounts) is just nasty.  Right?  Am I right?

I thought avoiding bitter flavors was a great personal priority, but it turns out, I am probably wrong on this one.

The other thing I’m wrong on is that the taste buds are only on the tongue thing.  Now, this is where things get weird.

Scientists have been quite surprised to discover these little taste receptors in unexpected places in the body.

“The other recent revelation in taste research is that the receptors …are not restricted to the tongue. They are distributed throughout the stomach, intestine and pancreas, where they aid the digestive process by influencing appetite and regulating insulin production. They have also been found in the airways, where they have an impact on respiration, and even on sperm, where they affect maturation.”1. 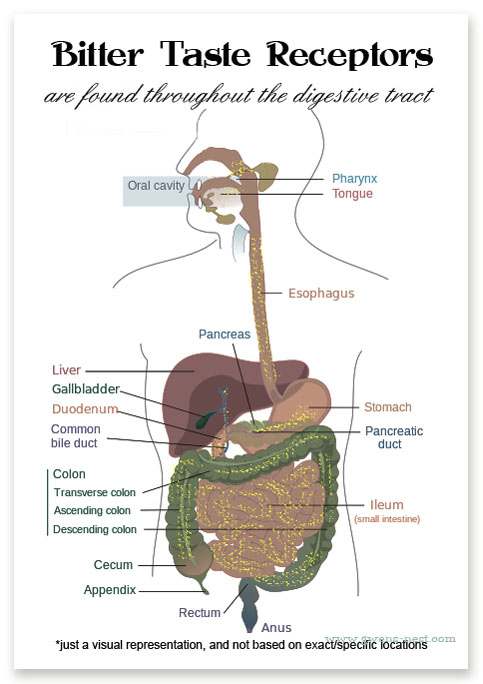 Isn’t that bizarre?  These little guys are found in almost every organ of digestion.

But what are they DOING there?  Thankfully, my experience with the sour cream ended when I swallowed…the thought of tasting something all the way through the digestive tract is less than appealing.

“Despite the similarities in receptor molecules and transduction cascades, the emerging picture is that the diverse chemoreceptive systems do not all evoke a sensation of taste, but rather serve different functions according to their location.” 2.

What that means in English is, “We’re not real sure what they do yet, but they do cool stuff besides tasting.”  It appears, from a variety of research angles, that the taste receptors are actually a communication system for the digestive organs.  Historically, bitters were used to enhance digestion and strengthen filtering organs.  Modern science seems to be backing this up as well:

“Dr. Osborne’s lab had previously proposed that T2Rs trigger a hormone that stimulates the digestion of fat and protein and limits the absorption of dietary toxins. But exactly how was unclear.

The new experiments suggest that the hormone in turn stimulates neighboring enterocytes—the intestinal cells that absorb nutrients—to produce more of a protein called ABCB1, which transports a variety of chemicals—and toxins—out of cells.” 3

When you taste something bitter on your tongue, your bitter taste receptors are triggered.  In turn, they begin to trigger or ‘ping’ all of the other bitter taste receptors all the way down your digestive tract, stimulating your organs of digestion.  The espophagus undulates, the pancreas produces enzymes and your own blend of probiotics, the gall bladder dispenses bile to break down fats, and the intestines get primed and ready to digest the food that’s about to come down the hatch.

And check out the cool photo at the bottom of this short article illustrating how bitters enhance the cells ability to remove toxins!  (Told you this was really cool stuff!!!)

Awesome news, right?  Not really for people who avoid the ‘bitter’ taste.  And the taste seems to be key…covering the bitter taste with sweet seems to weaken the overall signals and benefits of digestive bitters. 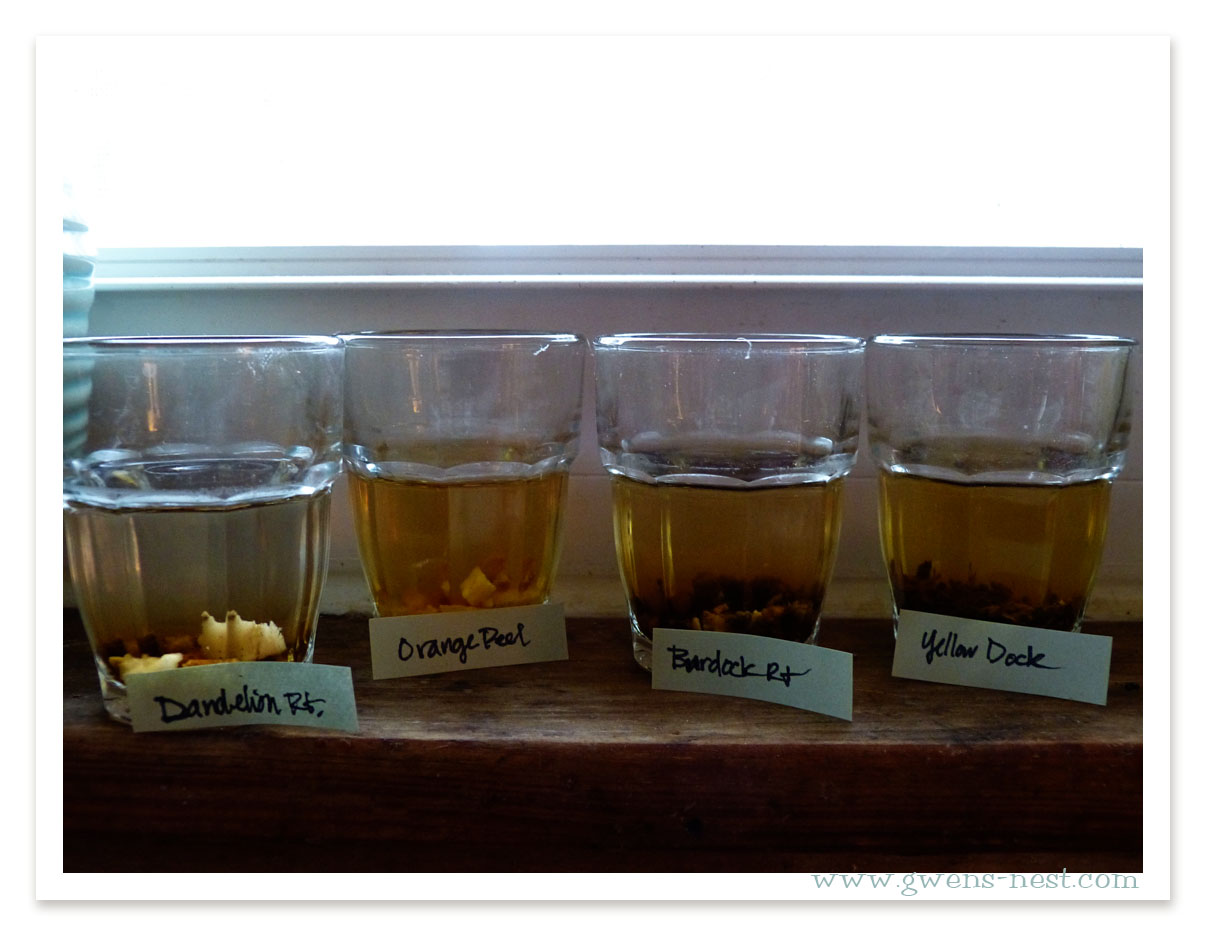 But Guido says that there’s hope: the more you stimulate the bitter taste receptors, the more they reproduce, and the heartier they become.  This means that if you begin to include bitter tastes in your meals, you can actually improve your entire digestive tract function!  Enhancing your own body’s production of probiotics is far less expensive and more effective than continuing to pop pricey pills, huh?

As with any natural remedy, I want to know if it really works in real life.  Turns out, it does…

[bctt tweet=”the more you stimulate the bitter taste receptors, the more they reproduce, and the heartier they become. https://gwens-nest.com/?p=1531″]

For my own part, my younger two children both had some odd issues with <ahem> “number 2”.  One child was very constipated, and the other very loose…and this was with plenty of fluids and nearly identical diets. Something was funky in their systems.

This was to the point that the older had functional constipation and refused to go #2 during the day…so at almost age 5, she was still not fully potty trained, and I was waking up to nasty diapers every morning.  EVERY morning.  And these were abnormally awful, stanky and large stools.  Sorry.  It was wicked nasty.  Something was very wrong, and I didn’t want to give her habit forming meds at such a young age.  I wanted it FIXED.

I started offering bitters before meals, and saw a pretty rapid change with both kids.  Within weeks, both had properly formed stools, and they became more regular.  Both kids are potty trained now and are regular.  And they remind me about their bitters if I forget. 🙂

Here are a few other personal testimonies and experiences with digestive bitters among my online friends:

“I had eczema issues for 30+ years <gulp>, and had tried every diet and cream angle religiously. I was GF for 5+ years/sugar free at times, and had a very healthy/whole foods diet.I still battled painful bouts of eczema on my hands each year as winter set in.
I had heard about bitters being a possible remedy for eczema. I started taking Urban Moonshine’s digestive bitters before meals, and within a month (during the holiday season, even) my eczema cleared. I continued with the bitters, and found that I was not getting any more break outs. Even after indulging in gluten and sugar containing foods over the holidays…a FOR SURE trigger, my eczema did not return.” ~Jen B.
(And Jen is no longer GF!)

“They have helped me a great deal in relieving gallbladder pain, the area of my liver and gallbladder used to feel swollen to me. But it is normal these days. I haven’t had a gallbladder attack in a very long time. Also, no more heartburn!” ~Jennifer J.

“Bitters stopped debilitating stomach pain completely. I had tentatively linked the pain to my gallbladder. I took them regularly for several months but rarely do now. Yesterday afternoon, I felt a hard knot in my stomach that felt horrible, possibly due to undigested food sitting there causing gas. It was fast becoming painful enough to limit my movement and stop my plans for the day. I took some bitters and within 5 minutes, the pain was completely gone. Bitters are amazing!” ~Jessica I.

So, are you EXCITED to try these, yet?  Check out part 2 in this series, that will include videos/podcasts for learning more, and links to some great digestive bitters blends. And part 3 I share my DIY digestive bitters recipes!