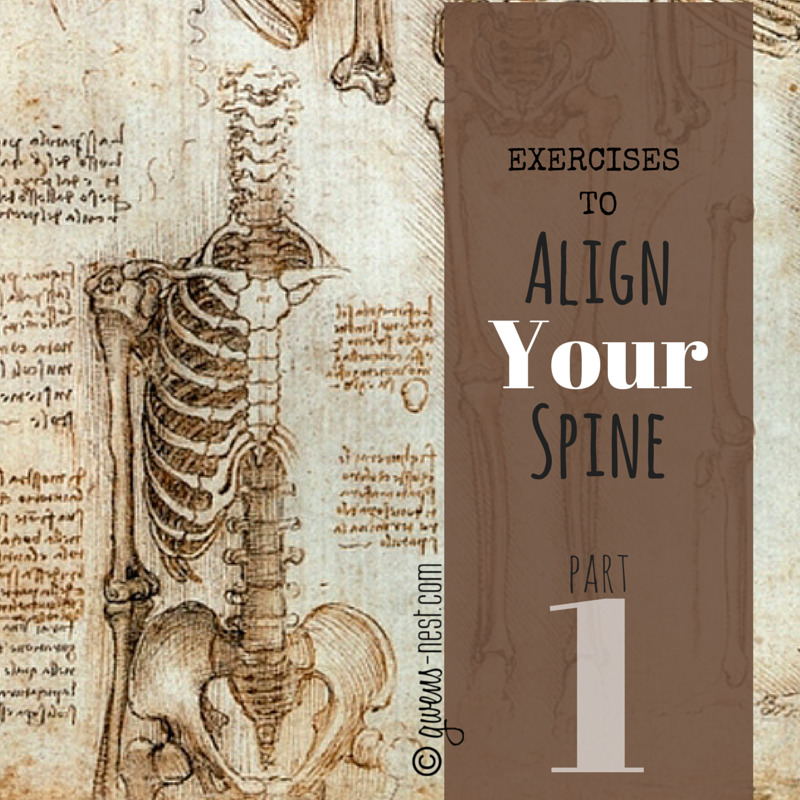 If you had to align your spine due to persistent pain or nerve injury, where would you turn?  This is where I found myself during my pregnancy with my 3rd baby.  By the time I’d reached the ‘waddling’ stage, I began to have recurring trouble with my right hip.  Of course, I attributed this to the ‘normal’ aches and pains of pregnancy.  If I was on my feet a lot, and especially if I walked a lot, I began to ‘feel’ my right hip joint.  Then, at other times, seemingly out of the blue, I’d be walking along and my hip would just give out, and I’d have to hop and hobble to the couch.  It felt as though the lining of my hip joint had been stripped away, and my bones were grinding against one another.  NOT fun.  After laying down for a while, it would be sore, but I could walk again.  I was just SURE that this was pregnancy related, and that it would go away once I had the baby…but it didn’t.  I continued to have hip problems, and the episodes of my hip refusing to cooperate became more worrisome, since I was now carrying a newborn in my arms, and was less capable of grabbing the wall to catch myself.  I really felt like an old woman at times, hobbling along.

I was pretty sure that the pain was nerve related, because, even though exercise aggravated my condition, it would also come on suddenly with no provocation at all, like someone flipped a switch.  It felt like the inside of my hip joint had been stripped of the cushion of cartilage, and my bones were scraping together with each step.  The episodes of nearly falling began to happen closer together, and were now occurring once a week at least.  This clearly wasn’t getting better on its own as we’d hoped. 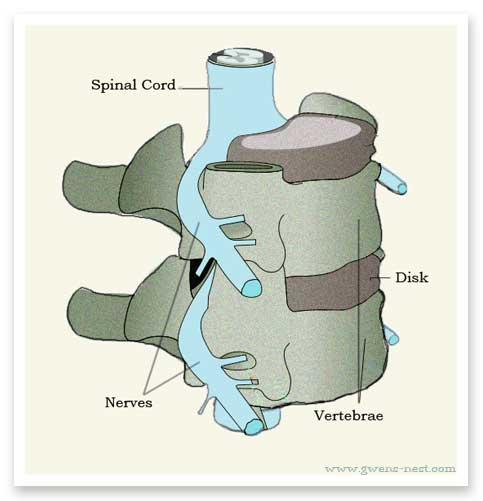 My husband and I were both concerned enough to seek some help, and we visited a local chiropractor who did an evaluation.  He showed us a 3-D model, similar to the diagram above, and explained that the bones of the spinal column are stacked up, with soft cushions of cartilage between them so that they can move and bend.  The hard bone protects the spinal column…the thick bundle of nerves that is the superhighway of nerve signals, that transport messages to and from the brain to every organ and muscle in the body.  The nerves branch out from between each vertebrae, where they branch out as a living network that coordinates every muscle, tissue, and organ in your body.  If the vertebrae or disks begin to compress on the nerves, you begin to have issues like I was describing…or worse.

I heard  “Serious issues…three visits a week for a month, and then one visit per week for up to six months to clear this up.”  We left the office, slightly dumbstruck, and contemplating the impact of that much money flying out of our savings account.   As much as I didn’t want to be an old hobbled woman, I wasn’t ready to commit that much of our hard earned savings just yet…I still felt pretty normal most of the time.  But we both new that *something* needed to change, we just didn’t know what.  Or how.

A couple of months passed, and we found ourselves at a family Christmas gathering.  My cousin was sharing about his job as a physical therapist, so I pulled him aside and asked him about my hip.  Providence.

He listened and was sure that he could help me.  “We practice a form of physical therapy called ‘Postural Restoration’.  The idea behind it is that we use the muscles to move the bones back in place.”  Then he went on to explain to me that almost all of use overuse or favor one side of our bodies.  This overuse of the muscles on that side causes compression of the spine over time, which can press on your nerves and cause problems.  In other words, your OWN muscles pull your spine out of alignment!

How in the world does this happen?  Well, if you’re a child of the 80’s, then surely you remember the ‘cool’ stance of jutting your left foot out slightly to one side?  There you go.  All the weight is on the right hip.  A decade of coolness, a decade of carting toddlers and laundry and groceries, and a MOM sized bag on my right side…my spine was paying the price. 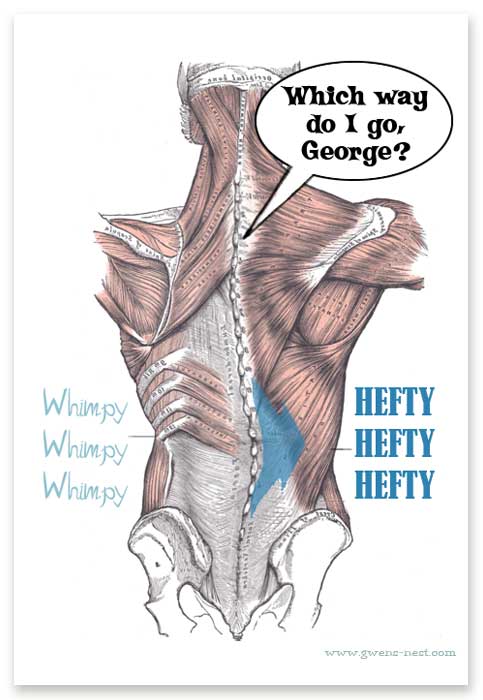 Imagine doing push ups and curls with only your right arm for a few months.  What would happen?  The muscle on that side would become MUCH stronger than the left arm.  Now imagine that you’re asked to hold a large board up over your head for a while.  Odds are, the left side is going to start struggling to hold up its end of things.  This is exactly what happens with the back muscles. The compressed, uber ripped, right side back muscles had pulled my spine into a subtle, but debilitating S curvature that was pinching a nerve and causing my hip problem.  Pretty much all of us have this type of spinal curvature to one degree or another, depending on your level of coolness. : )   For some, even the right shoulder is lower than the left.

Now, a chiropractor will look at crooked bones, and crack those suckers back into place.  Only problem is, they’re still attached to those super-pumped right side muscles, that simply pull the bones right back out of alignment.  That’s painful.  And it requires 3 visits a week for up to 6 months, and thousands of dollars.  Rats.

The beauty of Postural Restoration is that there are stretches, exercises, and simple things you can do to target train the left side of the spine to pull your vertebrae back into alignment!   Tomorrow, I’ll post a simple diagnostic exercise so that you can tell if you’re out of alignment, and show you the simple exercise that ‘cured’ me of my painful hip problem in just a couple of weeks!

Part 2 of  Align Your Spine