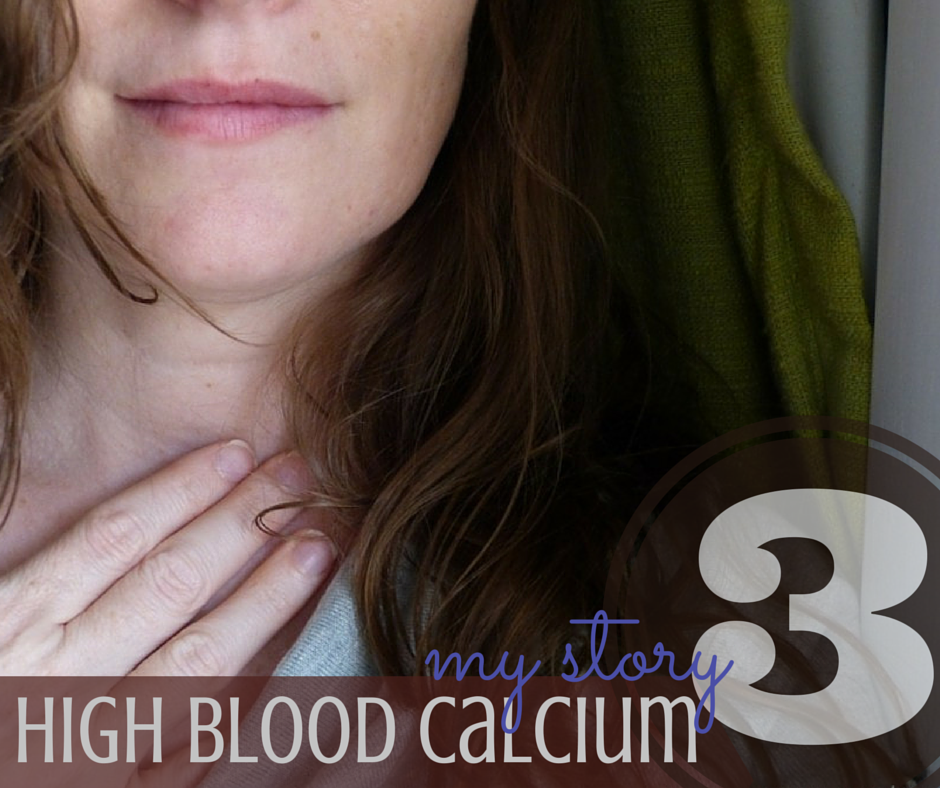 If you’ve been following along with my health issue posts, this is part III.
(Click here to start back at the beginning)

It’s a Sunday afternoon in late summer, and by the grace of God (and I don’t say that lightly), I’ve just discovered the root cause of my health concerns from the past couple of years…
I have a parathyroid tumor.

At least, I am convinced that I have one.  If Dr. Norman’s site, and my lab reports are correct, even I can pretty much make a slam-dunk positive diagnosis: primary hyperparathyroidism.
It’s a tumor.  And the only known cure is surgery. 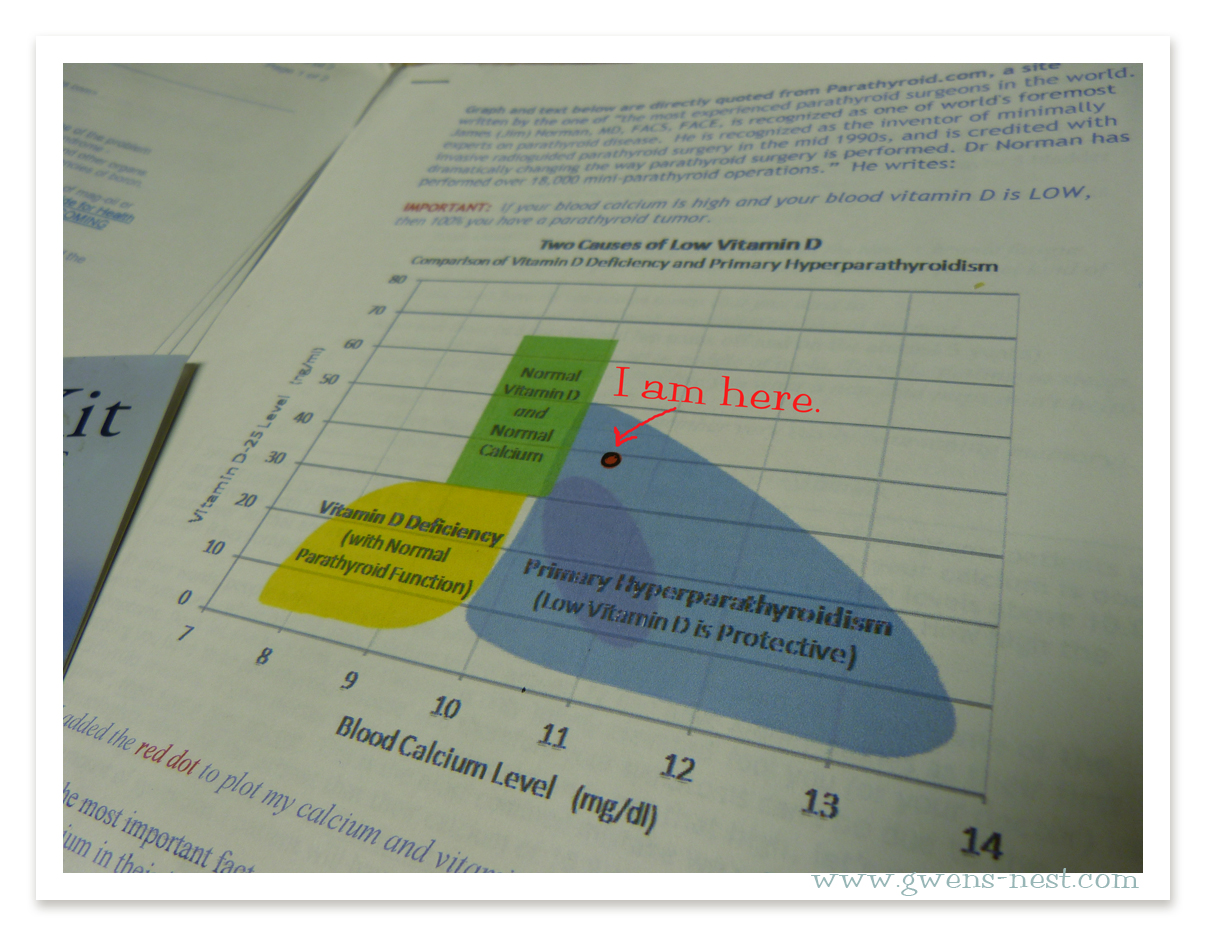 First, I tell my husband.  He’s skeptical.  But to be fair, he’s skeptical about everything.  So I show him the website, the charts, the graphs, my labs…the “cost of surgery” page.  He begins to subconsciously rub at his neck in an agitated way.

I tell my Mom and sister, and I pen an e-mail to my inlaws…

The consensus: “Is it cancerous?”

OK…lesson learned.  So I just started being quiet about it.  I was sure.

If you want to know why I was so sure, I’m writing more about high blood calcium and I’ll post that soon.

I was fine with the fact that I had a neck tumor.  In fact, if anything, I was ELATED to have finally found out why I felt like a 60 year old woman.  And that there was a REAL and MEASURABLE problem beyond just the vague ‘tired’, ‘feel old’, ‘always irritable’, and ‘noises bother me’…none of those things sounded like valid “conditions.”  They sounded more like complaints and excuses.

Knowing that I had a tumor that was causing these things actually gave me more confidence that what I’d been experiencing was a real and VALID health crisis.  I didn’t need to feel guilty about my symptoms!  But I also didn’t want to continue to live with my symptoms either.

I still had a very uneasy feeling, though, that I just couldn’t shake.  And that was with the whole ‘neck surgery’ and ‘we don’t know why this happens’ deal.

I mean, we live in a very scientifically advanced society.  Why do we NOT know the cause of things like this?

I did a lot of research, and praying.  I wasn’t scared.  It wasn’t worried about the money.
I just didn’t have peace about surgery yet.
I would do it if I had to, but I really wanted to see if there was another way.

A friend e-mailed me, and shared her concerns about it too.  Her thyroid had been partially killed off by radiation as a ‘routine procedure’ for her diagnosis.  This was several years before had become interested in natural health and healing…and a long time before she really understood the long term ramifications of this permanent “treatment option” that she’d agreed to all those years ago.  She had regrets.

She writes, “If you go through surgery and it doesn’t turn out right you will always wonder if there was another route you could have taken.”

I would always wonder if there were another way…if there was a REASON behind why the parathyroid cells just decided to get jiggy and start tumorizing and throwing out constant streams of calcium sucking, bone sapping hormone.  There just HAD to be a reason.

My guess was that there was something missing…sort of like when the thyroid is starved of iodine and begins to goiter.  What is this was the parathyroid gland version of forming a goiter?

Google was at a complete and total loss.  There was nothing there.

A Break In the Case

And then, on August 12th, that same friend offhandedly e-mailed a link to an article…one that she hadn’t even read. It was titled, “The Boron Conspiracy”, by Walter Last. (link will open in a new window)  He happened to mention the parathyroid gland, so she sent it to me.

To be perfectly honest, I normally steer clear of anything with the term “conspiracy” in the title.  But I made an exception, and I’m SO glad I did!

Now, Walter has a story to tell and a bone to pick (quite literally) about boron.  He’s passionate, but there is a very brilliant mind there.  He’s a scientist turned nutritionist.  He’ll tell you everything you want to know about boron down to measurements and dosage amounts.  The man is thorough.

I promise you that this is the ONLY place on the web that I could find that mentions boron as the essential mineral for the parathyroid glands.  Walter writes,

You have got to be KIDDING me!?!  It can’t be just that simple…boron is SO common…everybody’s heard of boron, right?  RIGHT?  Sure you have!  You probably already know this mineral by it’s more common name…or it’s brand name:

A little ray of hope lit up my heart.

Walter Last gave highly detailed instructions on how to create a boron supplement using Borax to re-regulate calcium metabolism.  And since the parathyroids CONTROL calcium metabolism, I figured it was worth a good shot that supplementing with it may positively affect the tumor, even if no one else had written about it or tried it yet (to my knowledge).

But wait…before you think I’ve TOTALLY lost my marbles, and am over here eating out of a detergent box, it might help to point out that, like mined ancient sea salt, borax is a mineral mined out of the ground, and just dropped into a box.  It’s not a highly processed noxious chemical at all. 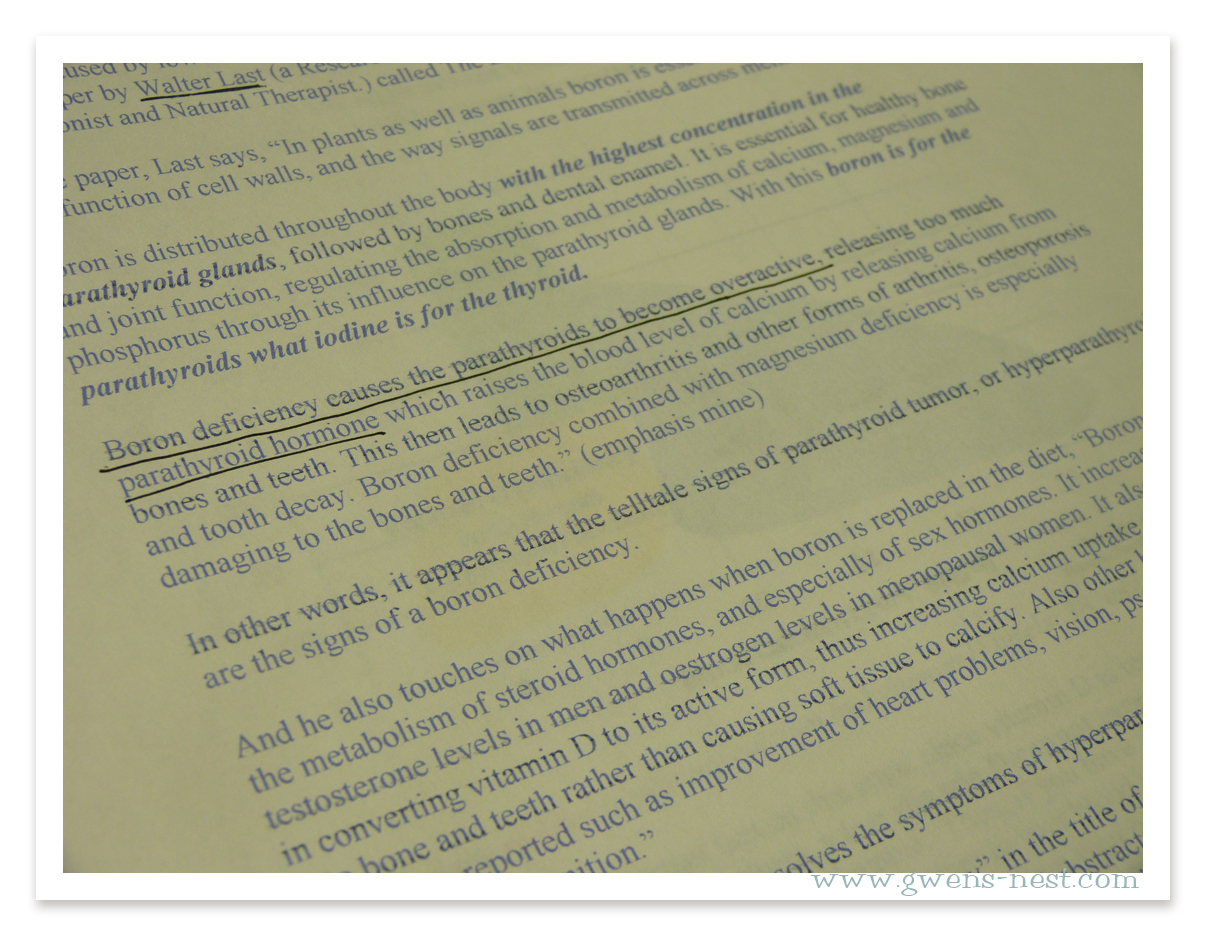 But before you grab your spoon and a cereal bowl…you should know that it tastes gross and soapy.  And most importantly, it’s a MICRO nutrient, much like iodine.  Your body only needs teeny tiny amounts.  But problems arise if your diet is depleted of it.  I studied Walter’s instructions, and prepared a solution of boron supplement.  And stashed it in my fridge for later.

Before I crossed that bridge, I had to go face my new doctor and somehow present her with my crazy ideas well thought out research.

With my follow up appointment was just days away…I put together a notebook full of my lab results, the parathyroid information from Dr. Norman’s site, and the information from the boron article.  I also went a few steps further, and did additional research to see if boron was being studied.

Turns out, there were LOTS of studies on it, and they backed up what Walter Last’s paper was saying…born somehow plays a critical role in calcium metabolism, causes some pretty big issues if you’re deficient, is safe for human consumption at the levels I’d be taking it, seems to have a stabilizing effect on hormone levels…this last study concludes, “The findings suggest that supplementation of a low-boron diet with an amount of boron commonly found in diets high in fruits and vegetables induces changes in postmenopausal women consistent with the prevention of calcium loss and bone demineralization.”

I armed myself with information and printed out studies.  I was ready.  I think. 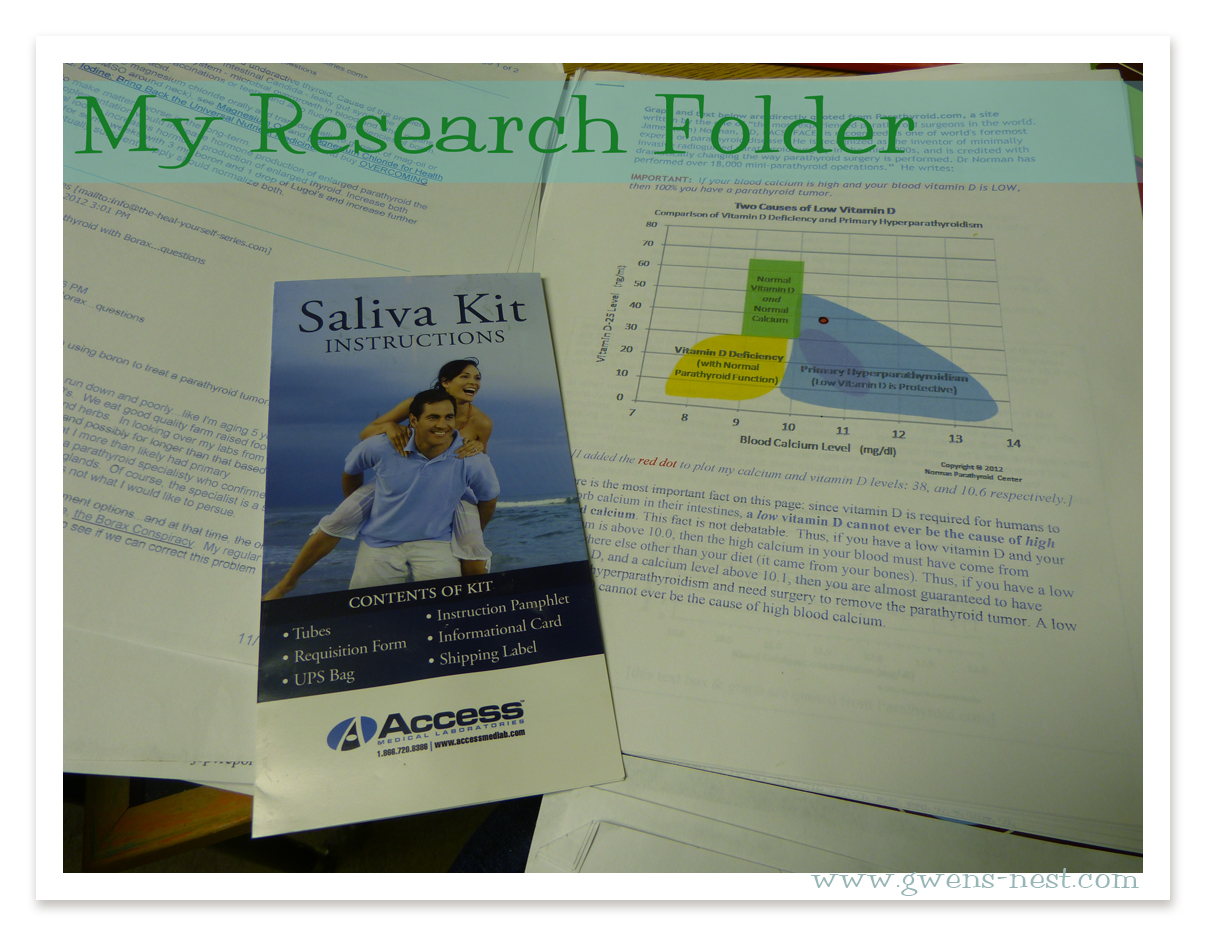 I’m going to be honest.  I was really worried about sharing my research with her.  I felt it was solid, but I also knew the likelihood of being laughed out of her office was pretty high.

The day of the appointment arrived, and I was ushered into the exam room.  My Dr. flew in, and took the seat next to me, flipping open my chart, and propping up her laptop.  “I’ve been SO busy, I haven’t even had a chance to look over your chart yet.”

I decided to wait and see what she had to say before bringing out my nerd folder research.  Honestly, I wanted to give her first crack at it, and also, I’ve had less than stellar results with asking informed questions at the Dr’s office before.  I’ve gotten ‘the look’, and the “So, you’ve been looking up things on the internet,” response.  I wasn’t sure how she’d take the whole, “I want to take Borax deal either.”

So we dived into my labs…not good.  Elevated bad cholesterol, LOTS of red and yellow squares all up and down my bloodwork markers…cholesterol was in the red.  Low vitamin D and EPA profiles.  She started jotting down supplements one after the other…Vitamin D, 5,000 IU’s a day, cod Liver oil or fish oil to get the EPA numbers up.

On to the hormones/cortisol panel.  More supplements went on the list: DHEA, progesterone cream, pregnenolone…

At some point, I became dizzy with the growing list of supplements that she was jotting down, and reached for my research folder…”Can I ask you about some things that I’ve found?”

She was open to it.

I brought out my labs from the previous doctor.  “I asked for these, initially just to look at my TSH levels and compare them to this year’s results, but you can see here that my blood calcium level is too high.  And here, on this recent lab, it’s also elevated…”

I went on to show her charts from Dr. Norman, which put me solidly into the diagnosis of primary hyperparathyroidism, based on my labs.  Her jaw might have dropped a little.

I cautiously asked, “Have you ever heard of boron?”  Her eyes widened.

”JUST this morning, a colleague here mentioned that I needed to read up on it…I have the resources already in my office.”

*prayer of thankfulness and sigh of relief* 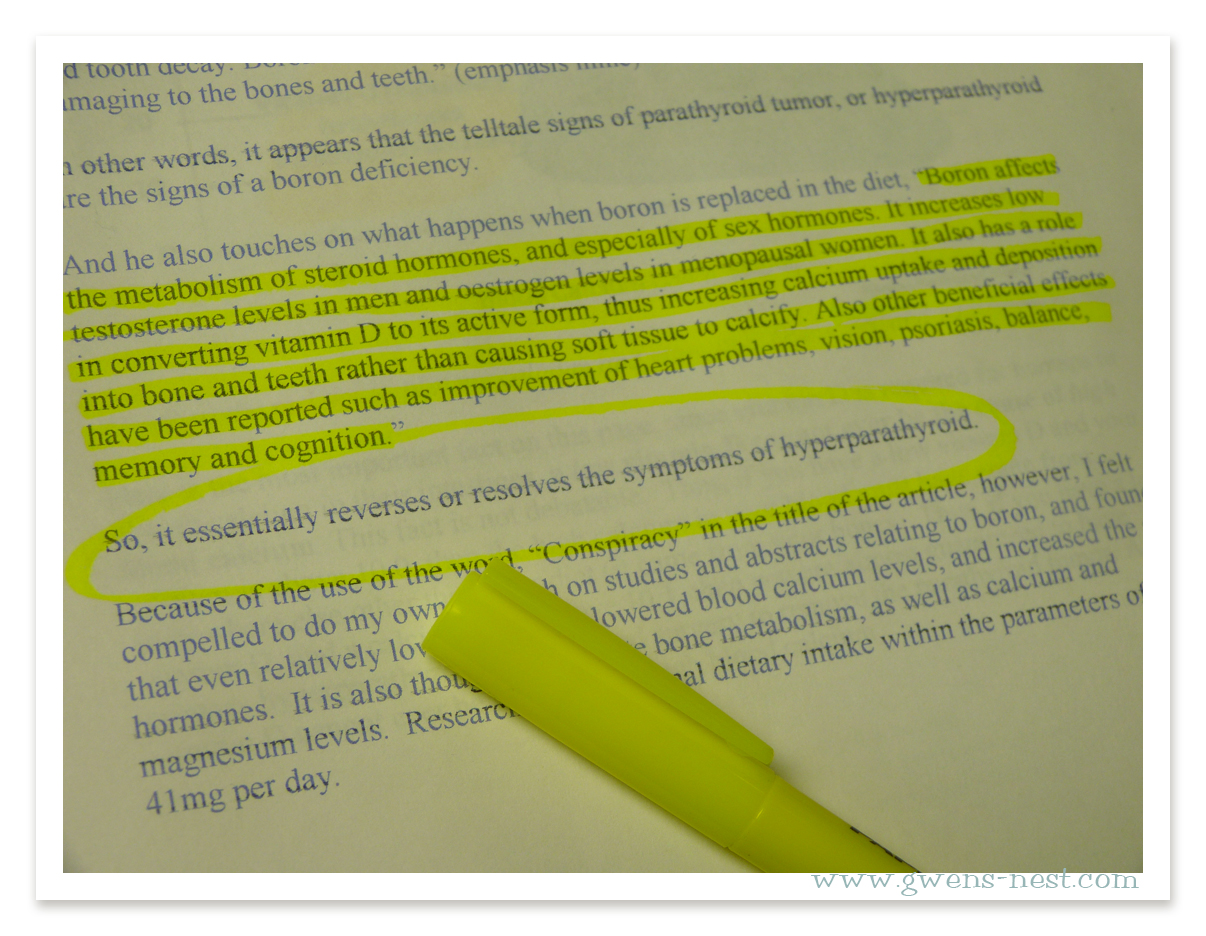 I went over the gist of the boron article.  Even though it’s never been PROVEN than boron can reverse parathyroid tumors, we can see in the studies that it is regulating calcium metabolism, and they ‘don’t know how’ it’s doing that. I’d like to try this route first, as opposed to surgery.

We continued to talk about the other concerns on my labs…hormone issues.  I had studies that showed that boron effects the metabolism of sex hormones.  Low D?  I had research to show that the body inhibits D absorption to protect against adding MORE calcium into the bloodstream.

At one point, she looked up and said, “THIS is IT!  This is your root problem!  All of your issues point to calcification…gall stones, bladder infection, the blood markers that show arterial buildup…ALL of this is related to over calcification in your body!  She went on to explain that things like cataracts are also calcifications…the body is storing excess calcium in tissues where it’s not intended to be stored.  Wow.

We agreed that I would go see the surgeon in two days, and just confirm what we suspected.  But instead of going for surgery, that my health was stable enough to do a one year trial with boron. ***double fist pump!***

And then she gave me a hug.  I love my Doctor!

My husband was kind of a mess at the appointment, fearing that the Surgeon was going to somehow mind-read that I was a whacko who wanted to self-treat with laundry detergent.  I assured him that his ultrasound machine would not detect my intentions.

Thankfully, the visit went swiftly.  He did a specialized ultrasound on the thyroid that quickly pointed out the overgrown parathyroid: lower left quadrant.  Between the size of a peanut and a grape.

Now, the experiment could begin…

Part IV What Goes Up… experimenting with a parathyroid surgery alternative

« Flu Remedies and Prevention
My Health Journey Part 4: What Goes Up… »