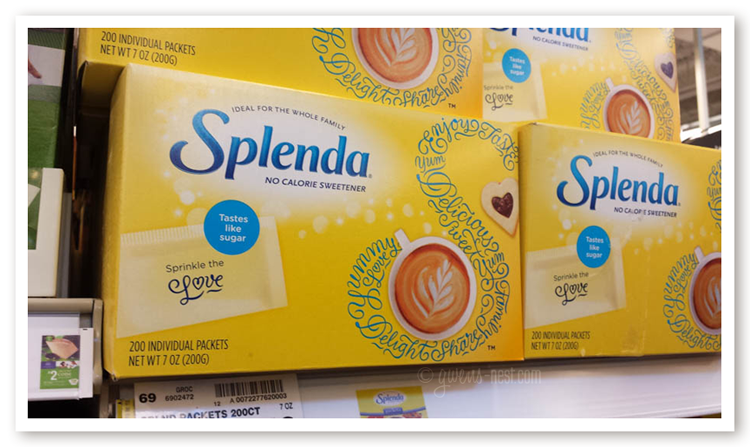 Splenda side effects- today I’m answering a reader question here on Gwen’s Nest. And BOY did I learn a lot researching this post!

Why is splenda not liked on the [Trim Healthy Mama] plan? Trying to find this answer everywhere.

This is a GREAT question, Elizabeth! I know that the Trim Healthy Mama plan has, from the start, always recommended natural sourced sweeteners, like stevia, erythritol, and xylitol.

I also remember reading the story in the original book about a woman who loved her Splenda, and wasn’t willing to change sweeteners. And the plan still worked for her. But I wondered why this was not one of the recommended sweeteners, because it *is* sourced originally from sugar. 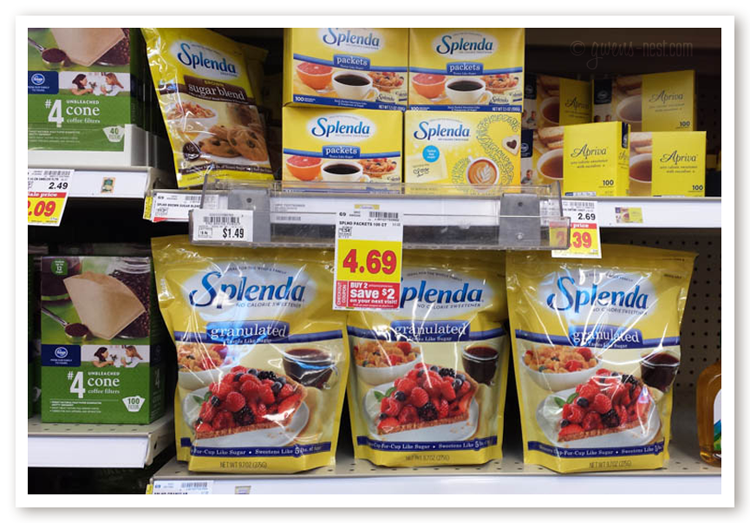 So where does the truth lie? In my research, I discovered that there is a lot of controversy over the safety of sucralose, and potential Splenda side effects. I really, truly wish it was a quick, simple answer that I could tie up in a little bow.

But alas. My search for sucralose pulled up over 550 studies on the U.S. National Library of Medicine site. So instead of combing through every single study, I’m going to focus in on the main conclusions and supporting evidence from the two main schools of thought on this topic.

I’ll do my best to give you the short & sweet of both camps, and leave you to make your own decision on what non-caloric sweetener to use.

Let’s call the first camp the Splenda Safety camp. In this corner, we find the manufacturer, the FDA, and a body of researchers who stand behind sucralose as a thoroughly tested and safe artificial sweetener. I’ll let the Splenda website summarize their position:

A review of an extensive body of evidence concludes that sucralose, the sweetening ingredient in SPLENDA® Sweetener Products, is safe for use by the entire population without exception.1

Now, there are a lot of angles that the research seeks to gain insight on, as far as how intake of Splenda may affect blood glucose response, weight loss, cravings, and more. With Splenda’s fat 62% share of the huge non nutritive sweetener market, there has been a LOT of well funded research.4 In fact, Splenda “was subjected to one of the most extensive and thorough safety testing programs ever conducted on a food additive.”2 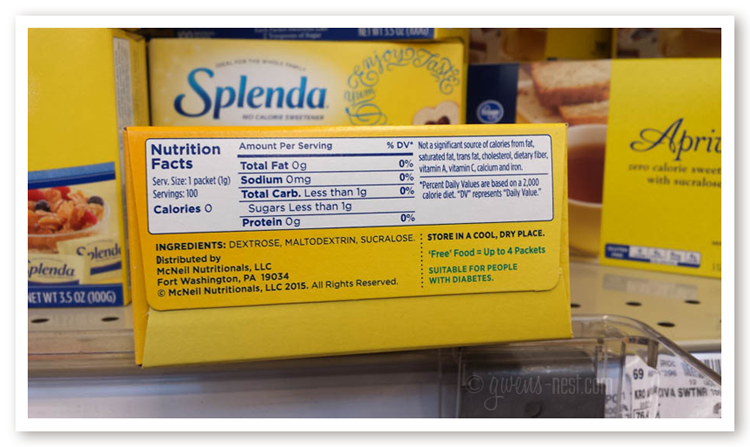 And while we’re at it, the topic of how sucralose is used and broken down by the body has become a major sticking point in the other camp. So let’s lay out the Splenda Safety position there too, outlined on the Splenda blog by author Robyn Flipse, a registered nutritionist:

Sucralose is water soluble and it does not accumulate in the body and is not broken down for energy – so it has no calories. About 85% of the sucralose we consume is excreted in our stool unchanged, while the remaining 15% is passively absorbed then excreted quickly in the urine. It is eliminated rapidly from the body.3

So, tied up in a neat little bow: the Splenda Safety camp is super sure that Splenda and sucralose is safe for human consumption. Brought to you by the  the makers of Splenda, who own 62% of the billion dollar non-nutritive sweetener market.4

Let’s call the second camp Splenda Dangers. In this corner is a smattering of researchers, independent consumer watchdog groups, and internet health gurus who are skeptical about the wholesale support of the product, and concerned that possibly some of the long term health risks have not yet been thoroughly tested.

Also in this corner is the sugar industry, partially funding one of the key studies that is pushing back on the Splenda Safety camp.

So what *are* the concerns that are being raised about Splenda and sucralose? 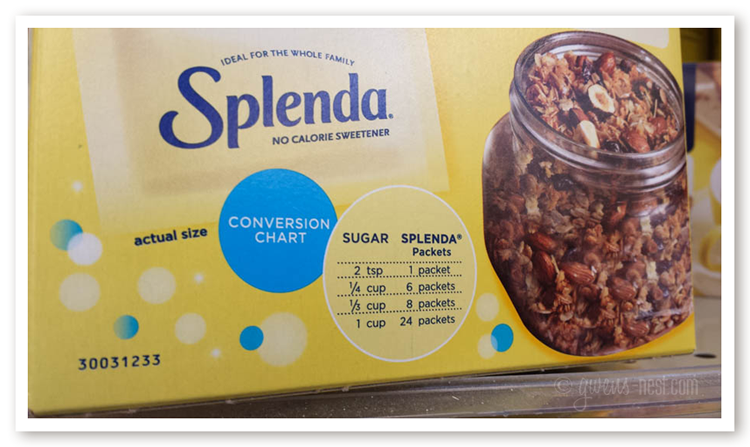 The original conclusions that Splenda and sucralose are not metabolized in the body. But the idea that there are no Splenda side effects is beginning to be challenged by a body of refuting research. Results seem to indicate that sucralose or Splenda may be metabolized…it may be more biologically active than we first though. There may be Splenda side effects after all. Concerns include:

Let’s look quickly at each of these concerns.

In a 2013 study by coauthor Susan S. Schiffman, PhD, an adjunct professor at North Carolina State University and four other researchers, there are indeed Splenda side effects. The amounts of sucralose within the FDA safety guidelines can reduce the number of healthy gut flora (the same beneficial bacteria found in yogurt) by up to 50%.5

To be fair, let’s put the study into perspective. The Shiffman study was done on rats, and not humans. But so are the studies that the FDA uses to support the safety of sucralose. So the playing field is level in that regard. The study also relied on amounts that are approved for use in food and not megadoses. According to Dr. Schiffman,

drinking the equivalent of less than one diet soda per day was found to reduce good gut bacteria, and two diet sodas a day could limit drug absorption.6

There has been a formal rebuttal of the study by an “expert panel” who “conducted a rigorous evaluation of this study. In arriving at its conclusions, the Expert Panel considered the design and conduct of the study, its outcomes and the outcomes reported in other data available publicly.” (I have not been able to actually find anything available publicly aside from the study abstract.) The expert panel did not disclose their affiliations, and not surprisingly, concluded that, “The study conclusions are not consistent with published literature and not supported by the data presented.”7 (Shocking)

I don’t usually lean toward the conspiracy theories, but I wonder if the panel of experts would have bothered to even look at the report if it was “consistent with published literature.”

From the study summary:

Evidence indicates that a 12-wk administration of Splenda exerted numerous adverse effects, including (1) reduction in beneficial fecal microflora, (2) increased fecal pH, and (3) enhanced expression levels of P-gp, CYP3A4, and CYP2D1, which are known to limit the bioavailability of orally administered drugs…These changes occurred at Splenda dosages that contained sucralose at 1.1-11 mg/kg (the US FDA Acceptable Daily Intake for sucralose is 5 mg/kg).

This seems to me to be a fairly straightforward thing to be able to test in human trials.

<knock knock> Hello? FDA? Is anybody home in there? Can we get some non-biased insights and additional testing here please? 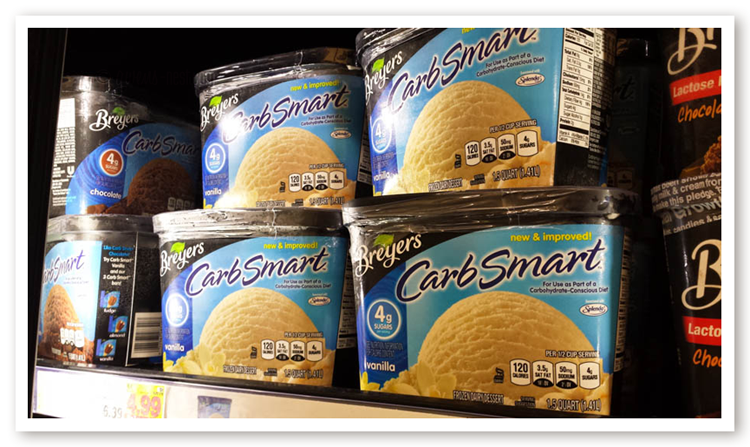 Splenda is sold as a baking friendly “heat stable” non-nutritive sweetener. I very much appreciate when terms are defined, so let’s start by defining “heat stable,” according to the FDA:

[Sucralose] is heat stable, meaning that it stays sweet even when used at high temperatures during baking.8

Mmmm-k. Oh dear. Dear, dear FDA. Staying sweet is nice and all, but let’s look at this on a little deeper level. I’d really like to know if  it’s *safe* to heat it and eat it.

One study says no…or at least it strongly infers that more needs to be known about Splenda side effects when baked and heated. The study…

revealed that there is effective decomposition in form of CO2 along with the formation of hydrogen chloride and other minor compounds. These findings not only corroborate the suspected instability of sucralose to high temperatures, but also indicate that even exposed to mild conditions the formation of hazardous polychlorinated compounds is observed.9

The study has been published since 2008, with no additional research or change in the FDA safety ratings. Splenda is still being sold as safe for baking.

And More Possible Splenda Side Effects

And details on new research are continuing to emerge. At the time of this writing, the Center for Science in the Public Interest (CPSI), a non-profit that tracks the safety of food additives and chemicals, has downgraded sucralose from the “caution” category to the “avoid” category with the release of a newly published study linking sucralose to leukemia and blood cancers in mice.

According to CSPI, the new study is more powerful than the industry-funded studies, which tested fewer animals, started exposing the animals beginning at adolescence as opposed to in utero, and ended earlier in the animals’ lives.10

The CPSI publishes the ChemCuisine ratings list. They currently rate non-nutritive sweeteners is as follows.

The THM plan is about improving overall health, and the authors consider natural sweeteners to be a healthier option long term. And I have to say that I fully agree with them.

Some have wondered if Splenda actually qualifies as a natural sweetener option, since (as their marketing suggests) it’s made from sugar. Turns out, it’s made in a chemical process using sugar and chlorine.

The core ingredient, sucralose, is manufactured in laboratories as a synthetic compound.4

According to the manufacturer, McNiel (a division of Johnson & Johnson),

“the sweetening ingredient in Splenda is made by a multistep process that starts with cane sugar.” But it then added that “Splenda is an artificial sweetener that does not contain sugar”4

“But WAIT”…you might say. “Splenda is NOT off plan for a Trim Healthy Mama!” And you’d be right! A couple of the (for occasional use only) convenience foods on the plan *do* contain Splenda, like the Carb Smart Ice Cream. And I know many ladies enjoy using the Walton Farms and other sugar free dressings, ketchups, and even the sugar free coffee syrup options at the local coffee shop. I myself have enjoyed a diet Lemonade at Chick-fil-a on occasion. 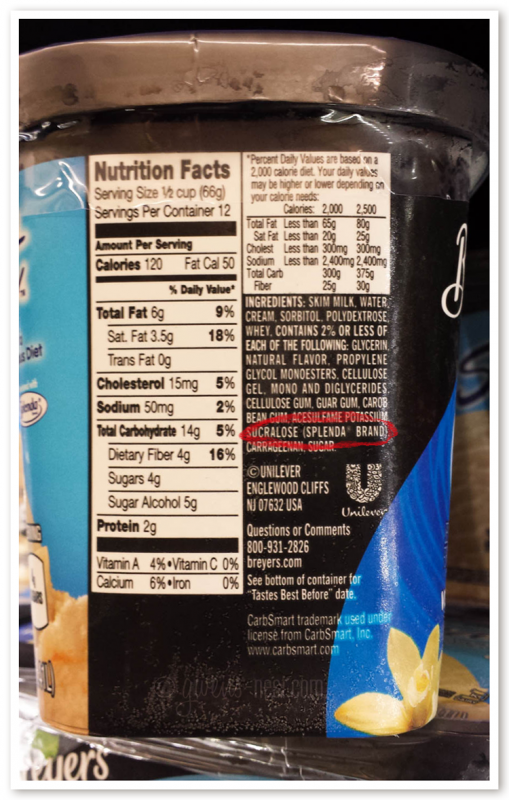 But the key word is “on occasion.” Splenda is not promoted as an approved THM sweetener, but it’s considered a personal choice option for those who enjoy it on occasion. And after researching this article, I think my occasions will be very few and far between. The possible Splenda side effects are just not very appealing.

I’m going to be more proactive about avoiding Splenda, and will choose the (also THM approved for occasional use) SO Delicious, no sugar added ice cream. And I’ve found that making my own salad dressings (like this AMAZING Greek and ranch dressing mixes that I make in bulk) are super tasty and very convenient.

While Splenda is non-caloric, it is an artificial sweetener that may pose some risk. Splenda side effects are still not fully known, and more research is needed to build a more thorough understanding of how it’s metabolized, how it performs in baking and heating, and the effects of long term use. I prefer to stick with alternative sweeteners like stevia and erythritol.

Was this article helpful to you? Thank you for sharing and pinning!  I’d love to hear your thoughts in the comments. Do you use Splenda? Do you feel it’s a safe option for occasional use?