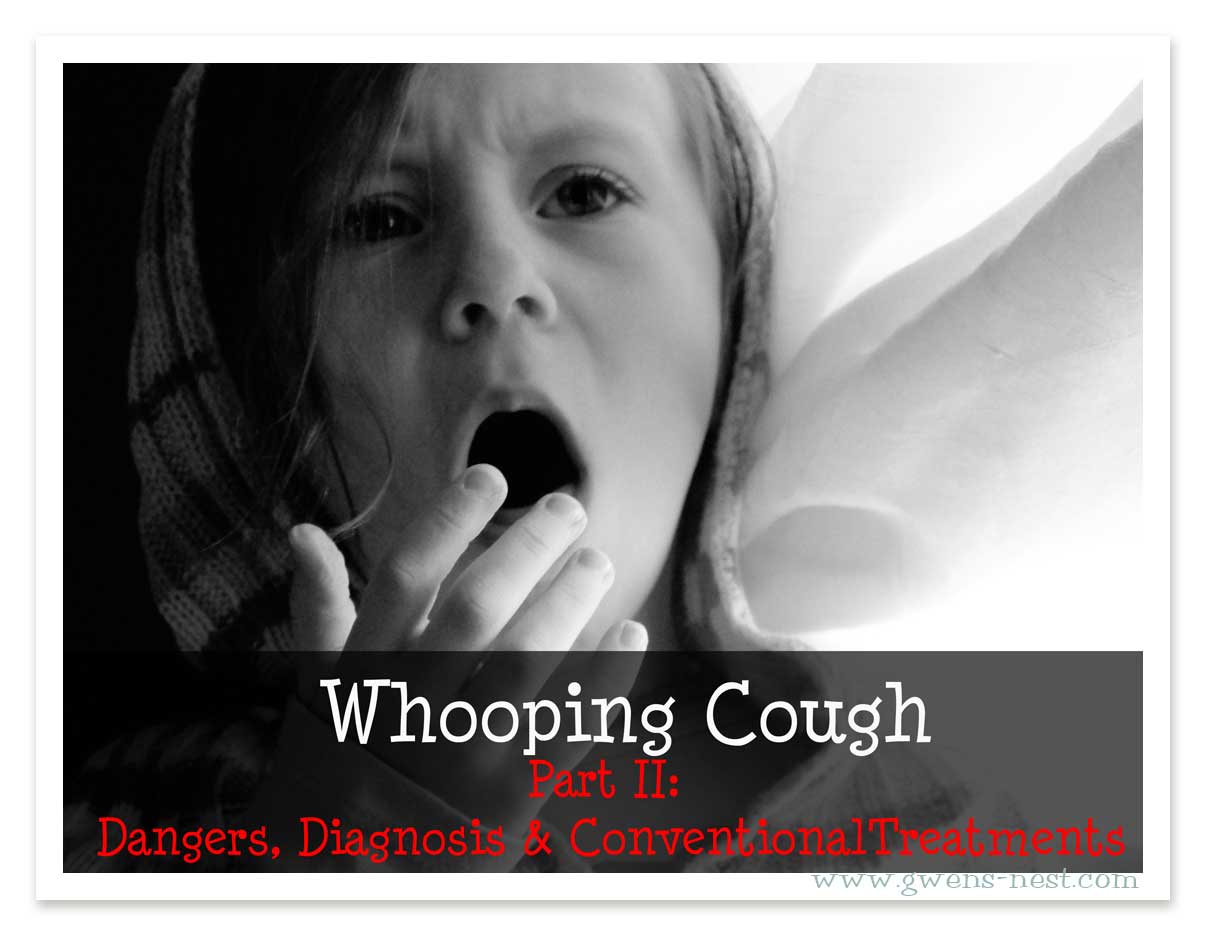 Our whooping cough symptoms and recovery this fall has prompted me to get the word out.  Though I’m not a fan of scare tactic health care, I want everyone to be aware of how contagious, and potentially devastating this disease is to those who may be immune compromised, and especially to very tiny babies.  It’s just not something to take lightly.

But it’s also not something to totally freak out over for most people.

First, let’s talk about the odds of this being really life threatening or serious.  Then, let’s dig into the topics of diagnosis, immunity, and conventional treatment recommendations.

I’ve had some great questions and feedback from my first post that I’d like to answer.  If you haven’t gotten a chance to read that post yet, you can read it here: Whooping Cough, Part I.

How Serious is Whooping Cough?

The main concern with whooping cough is catching a secondary infection.  Namely, bacterial pneumonia, which occurs in less than 10% of children with whooping cough under the age of two. (4)  The vast majority…90% of deaths from pertussis…occur in children younger than 6 months old.  Most of the deaths attributed to pertussis are caused by a secondary infection of bacterial pneumonia.  This is the most common complication and the cause of most pertussis-related deaths across all age groups. (2)

While I find these risk factors to be on the small side, it’s still worth taking precautions with anyone that is exposed to very young infants or the elderly and immune compromised.  I was also careful to watch for a fever or signs of pain in the chest/lungs in my little ones.  We did not have any complications or secondary pneumonia.

Another question that I was asked is “How do you know if a cold or sniffle is whooping cough?…

How would I get a confirmed diagnosis?

This is a great question, since the earliest and most contagious stages mimic a common cold.  One of the main reasons I took my son in to the pediatrician was to get diagnostic testing to find out if we were really dealing with whooping
cough.

This is what I’ve found about diagnosing whooping cough.  I’m going to pull from the CDC website, since more than likely that is what your doctor is going to refer to for diagnostic and treatment protocols.

The CDC describes the clinical case definition of whooping cough as “a cough illness lasting at least 2 weeks with one of the following:

We had two of out of the three…well, actually, three out of three if you count the one teensy-tiny whoop my boy did one night. These whooping cough symptoms are the start of the diagnostic process.

So how do they officially confirm whooping cough?

Pertussis (the bacteria that causes whooping cough) is diagnosed in three ways.

1. The “gold standard” preferred test is a bacterial culture, which requires a special swab and nerves of steel.  If you want to see what they do with said swab, click here.

WARNING: It ain’t pretty.  I can’t imagine my kids having this done.  A restraining device would have to be employed.
2. The second test is called a PCR…[polymerase chain reaction: researchers produce millions of copies of a specific DNA sequence in approximately two hours.]

3. And finally, there is a serum (blood) test, that looks for the antibodies that are created against pertussis, to confirm that you’ve had a positive case.  Each method has benefits and drawbacks…to see a chart that lays it out pretty neatly, click here.

The nurse practitioner that we saw agreed that this appeared to be whooping cough.  My son looked healthy, and didn’t cough at all, but he could hear congestion in the lungs.  He informed me that one of their doctors had called the CDC just that week, to find a source for the specialized swabs that are used in collecting a specimen in suspected pertussis cases, and he was told that there were no swabs available in the state.  That blew my mind.  Really?  In the whole state?  And the state that the CDC is located in no less!

No other diagnostic options were offered by my doctor’s office, which makes me wonder how often cases are even reported.  Of the cases that are reported, only cases that have (or are related to) a positive swab culture or PCR are considered confirmed cases.  The rest are considered “probable” cases, and they won’t make the news.  Or the statistics.  For this, and other reasons, I think the numbers relating to whooping cough are dramatically higher than what are actually reported.

Vaccine immunity among fully vaccinated infants is tested between 80-85% effective, and the effectiveness wanes from there.  Current medical research reveals that the immunity whether through vaccines, or from naturally acquired antibodies, are minimal after about 10 years. (2)
Prior to the Pertussis vaccine, which was developed in the 30’s and was being widely administered by the mid 1940’s, whooping cough was considered a childhood disease, mostly occurring in children between 1 and 5 years of age. (2)  It was thought to usually only occur once (6), and maternal immunity was thought to pass to babies under a year old. (2)
No carrier state exists. (1)  A carrier state means that you can pass the active bacteria to others, but that you have no symptoms of the disease.

How is Whooping Cough Treated?

At our doctors appointment, we were offered prescriptions for our 6 ½ month old boy for both antibiotics (approved for 6 months and up) and a cough suppressant.  I took the prescription, but came home to do a bit more research…this is what I found.

The CDC recommends treating whooping cough with antibiotics, but says “If treatment for pertussis is started early in the course of illness, during the first 1 to 2 weeks before coughing paroxysms occur, symptoms may be lessened. If the patient is diagnosed late, antibiotics will not alter the course of the illness and, even without antibiotics, the patient should no longer be spreading pertussis.” (5)

In other words, by the time you start coughing, it’s too late for antibiotics to do much good.

The CDC confuses me.  I have no idea how those two statements can both be true…they seem contradictory to me.

Beyond antibiotics, no other mainstream medical interventions or therapies, including corticosteroids, cough suppressants or beta-blockers have proven beneficial in treating whooping cough. (2)  And if you saw the illustrations of what the disease does to the lung lining in my first post, you understand why.

My husband and I decided not to fill the prescription unless we felt that his symptoms turned into a concern for pneumonia.  Personally, I wonder if giving antibiotics alters the body’s ability to create antibodies against what it’s fighting, so I prefer to let nature take it’s course as long as he is improving and isn’t sickly or running a fever.

We’d had some good results already in treating and preventing whooping cough with natural remedies, so I began researching ways of helping my little buddy to heal up faster…which leads us to this post:

Questions about Whooping Cough vaccines, and the cause of the Epidemic?  Check out this great blog post over on Holistic Squid. (will open in a new window)

2. http://www.jabfm.org/cgi/content/full/19/6/603
Note: this study was funded by the “largest company in
the world devoted entirely to human vaccines.”  Just so you know.

6.  Whooping-cough;
its pathology and treatment, By Thomas Michael Dolan, 1882
http://tinyurl.com/2asybrq
(obviously, very inaccurate with regards to pathology, but interesting in
regards to immunity and history of the disease)