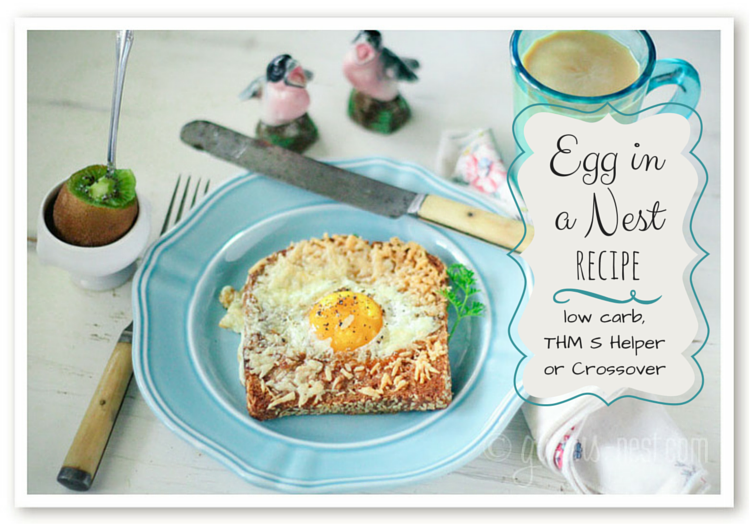 This egg recipe is such a treat! Egg in a nest is a recipe that I discovered years ago as a young bride, and my man and I both fell in love with the crunchy, buttery bread with the just right dippy egg nestled inside. But [bctt tweet=”Since I’ve been watching my carbs, bread has been absent from my egg meals. And toast. But no more! “]

*EDITED* This recipe fits into the Trim Healthy Mama plan as an S Helper: it’s got filling S fuels like egg and cheese, but it also has just enough carb to give you a bit of extra energy boost without pushing you into Crossover (maintain/gain) territory.

Please Note: I originally wrote that it could be enjoyed as an S, since the numbers can fit, but it’s the author’s preference that we keep the idea of the fuels in mind over the numbers alone. So technically adding a slice of sprouted bread to an S meal forms an S helper. *end of edit*

If you’re a nursing Mama, or if you work out hard and just need a little extra carb in your life, you can add a little boost of carb to this S helper by adding in half a Kiwi. If you’re ready for crossovers, dive in, Mama! Add a piece of fruit on the side and go for it.

This is what you’ll need: 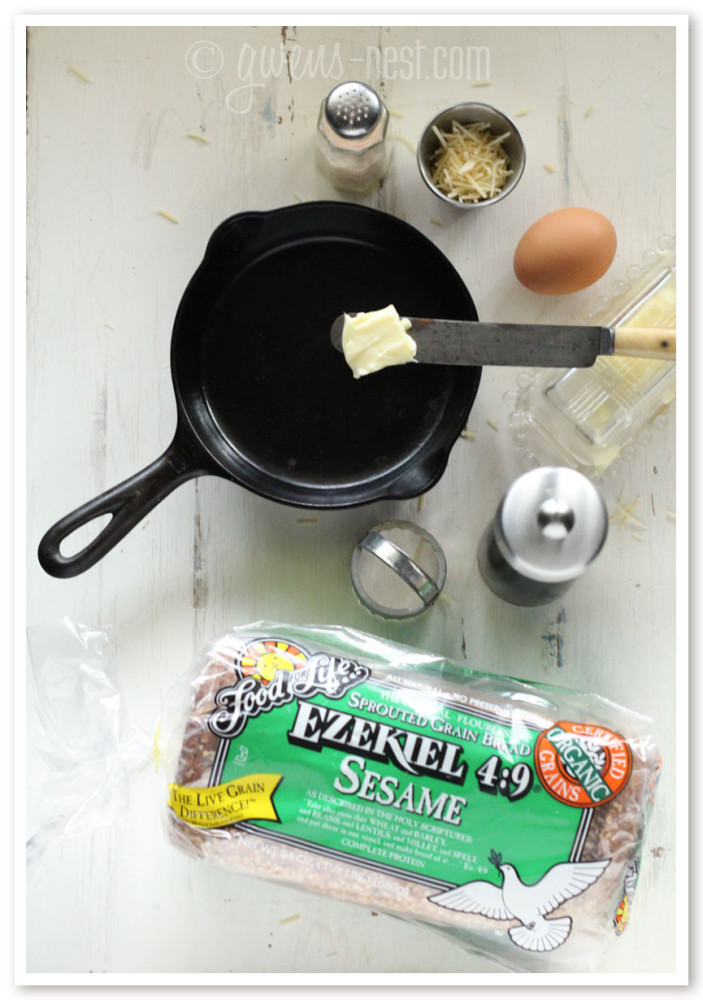 A slice of Ezekiel bread- the Sesame is my favorite. A couple of teaspoons of butter, a Tablespoon of shredded parmesan cheese (or try cheddar!), salt, pepper, and an egg. And a small cookie cutter or knife for the hole in your nest.

Let’s talk a second about Ezekiel Bread. It’s made from sprouted grains, so it’s very nutrient dense and lower glycemic than other whole grain products. And that also means that it’s very filling. Since this bread has no preservatives it’s sold in the freezer section at my store, and it can be pricey. To keep it fresh to the last slice, I just toss it into my freezer and take out one slice at a time as I need it.

If you’re not watching your carbs, any bread will do ‘ya. 🙂 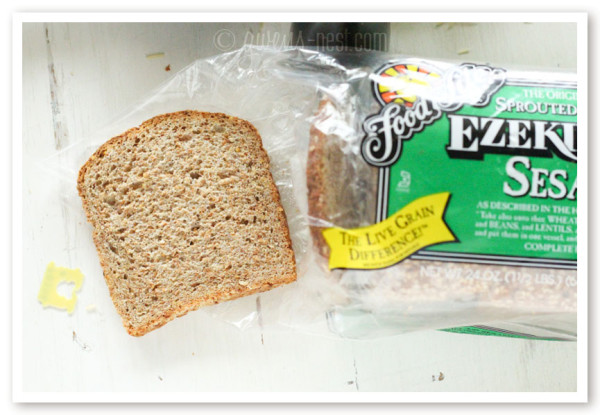 MMMk. Back to the recipe. Turn on your broiler. Melt your pat of butter in your ovenproof pan over medium heat on the stove. I’m using this little cast iron skillet. While you’re warming up the buttah, put your slice of bread into the toaster and give it a light toast to crisp it up a bit. 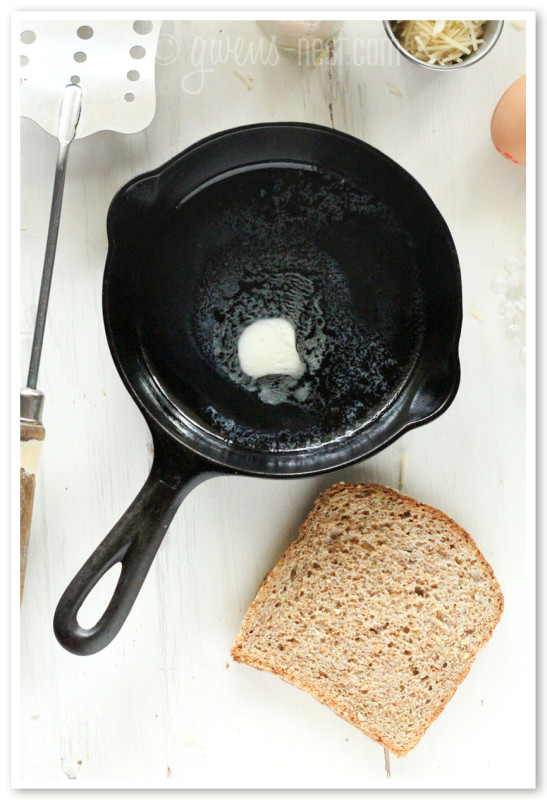 Once your bread is slightly toasted, cut hole in the center that’s slightly larger than the egg yolk. 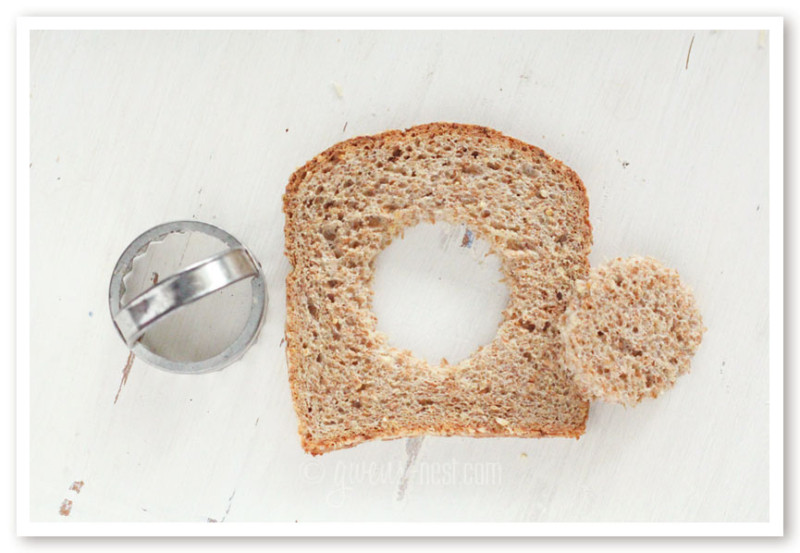 NOW, if you’re wanting to stay under 10 grams of net carbs, pay attention: don’t eat that circle!
The whole slice of bread contains 11 carbs. So give that little circle to a roommate, a dog, or a kid of your choice and lose the extra carbs. Amen.

Your butter should be melted now, so salt & pepper the skillet and then toss in about a tablespoon of shredded parmesan, and put your bread in on top of it all. Let it pan fry over medium heat until the cheesy bits around the edges are golden brown. At that point you should be able to get a fork or turner under the edge and flip it. 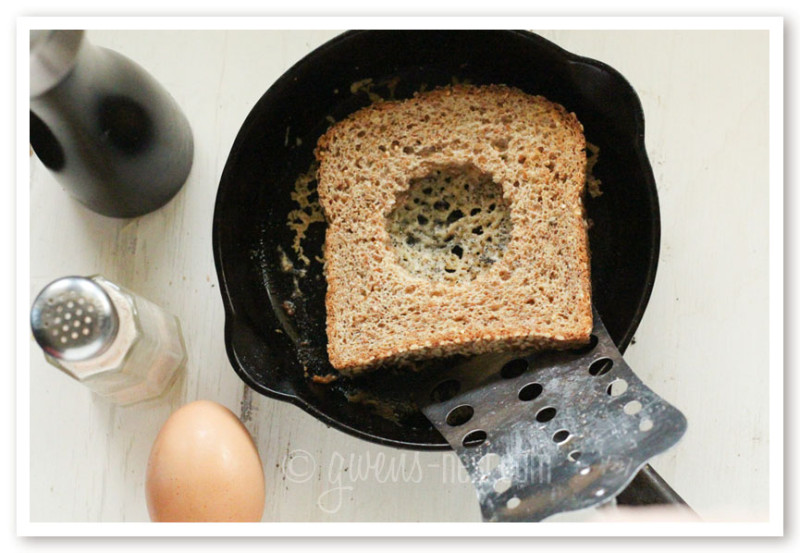 Now we’re going to put our egg in the nest! I cut a hole in the cheese that covers the hole so that the whites could roll underneath. Drop the yolk right into the hole. 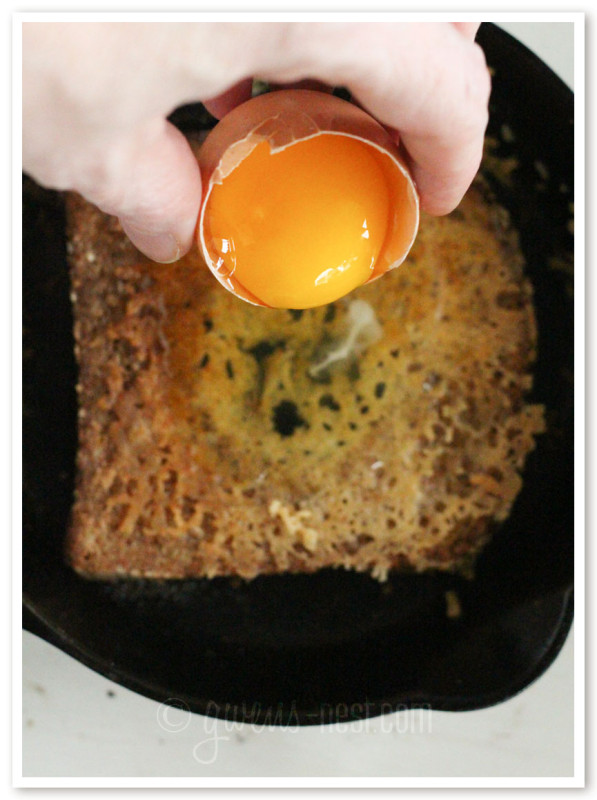 I like to lift the toast a bit to encourage most of the white to run down under. It will all cook to perfection. I added another little sprinkle of parm at this point around the edges, and popped it into the broiler. Watch it carefully and get the whites set fully and the yolk cooked to your preferred level of done-ness. 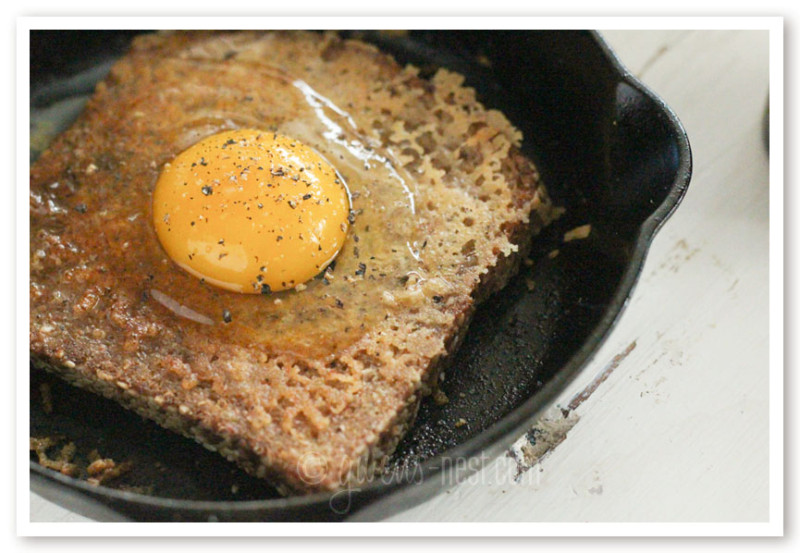 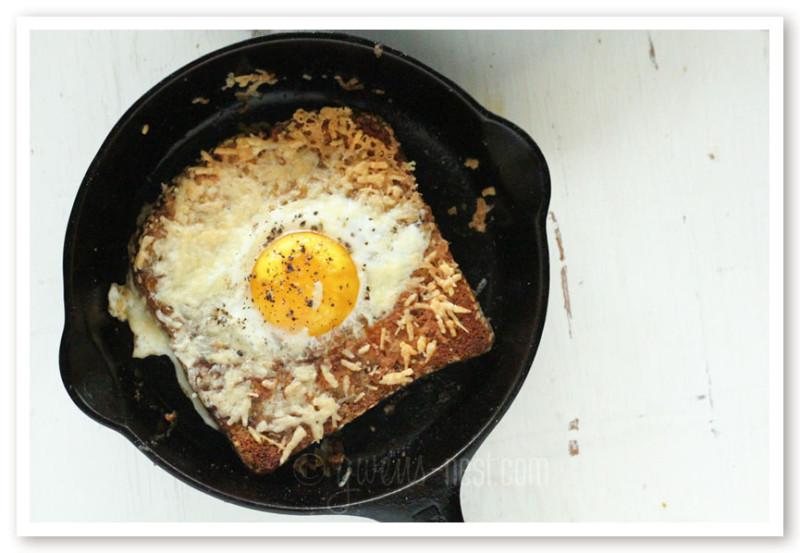 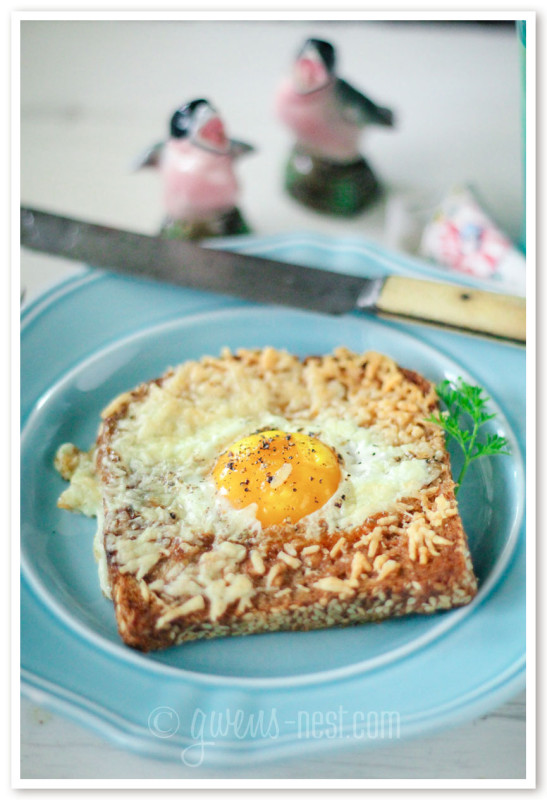 [bctt tweet=”There is really not much in this world that I love more than bread fried in butter.”] This is just beyond good. In fact, while I was editing the photos for this post, I got sort of peckish and had to go make one to eat. Right. Now. 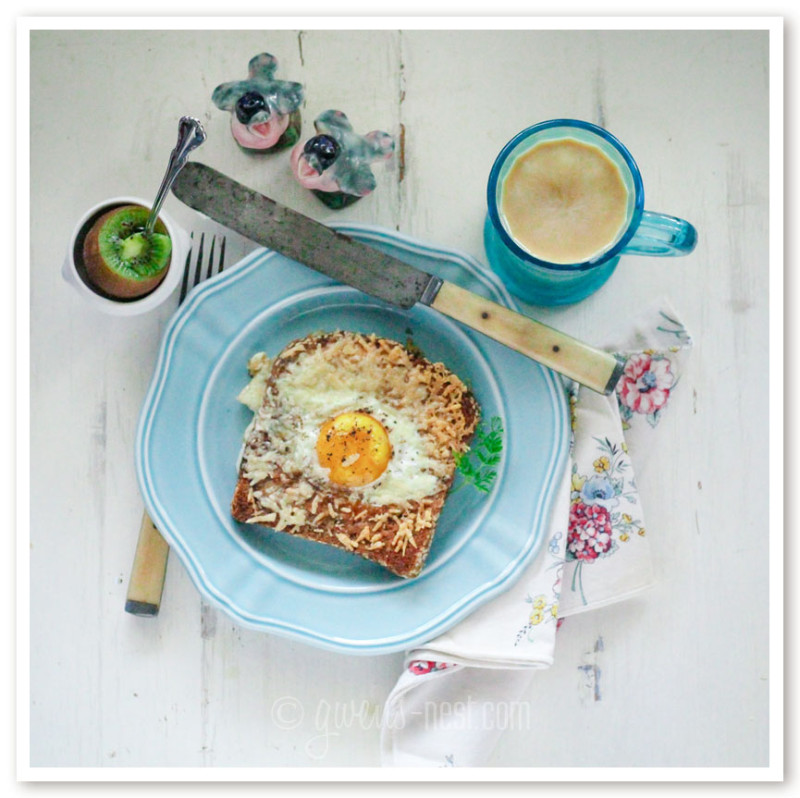 If you can’t make it right now, you may want to pin it later for inspiration:

Print
Cook time
5 mins
Total time
5 mins
This egg recipe is my very favorite way to enjoy eggs and toast together, and bonus: it's low carb! And healthy! Nothing beats buttery fried bread.
Author: Gwen
Recipe type: Breakfast
Serves: 1 serving
Ingredients
Instructions
Notes
Nutrition Notes/THM: For my sprouted bread and ingredients, I figured 10 grams of net carbs (if you don't eat the cut out piece!) and 22 grams of fat.
If you do eat the whole slice of bread, I figured it at around net 11.5 carbs
*edited* Consider this a THM S helper meal *end of edit*

To enjoy as a crossover, add a piece of fruit or another slice of toast to your meal. 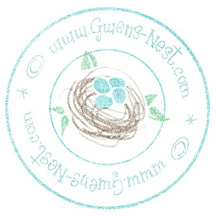