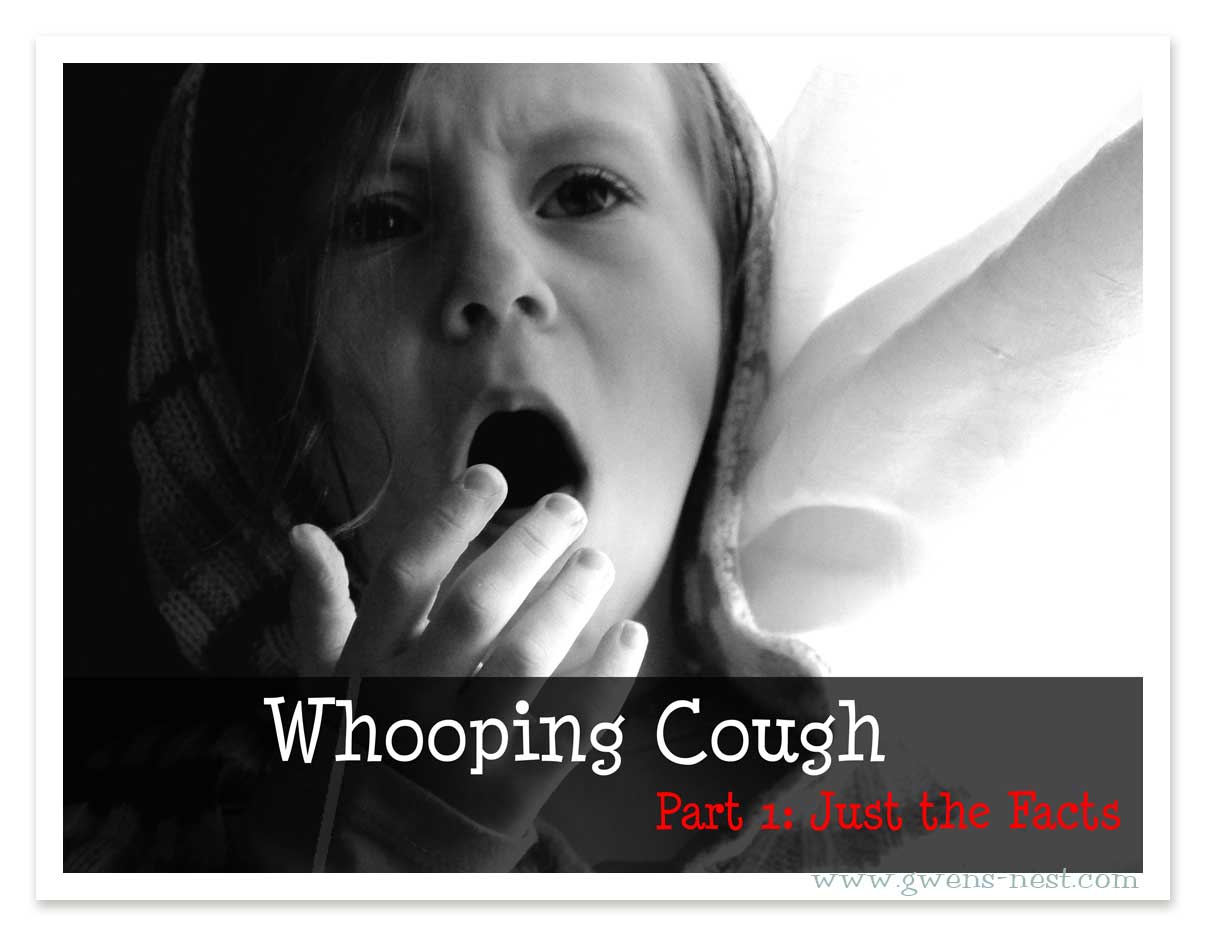 Whooping cough was the last thing on my mind as we packed for a late summer vacation at the beach.  But on the second day there, our baby’s cough got considerably worse…we realized that we had an insidious guest.  The pertussis bacteria had traveled with us on vacation.

The really scary thing is, my babe was the last of the four kids to get the “bad cough”. Up to that point, we really had only thought of it as a cold with a bad, lingering cough.  We started researching based on the symptoms we’d observed with our kids, and realized that we had whooping cough.  We had lived with it for a couple of months, unaware.

At the doctor’s office, my  baby was smiley and didn’t seem sick at all, and (of course!) he didn’t cough once during our visit.  the nurse practitioner began telling me that it didn’t seem to be croup; he seemed perplexed and a bit anxious when I asked him about whooping cough.  He agreed that the symptoms fit, and told me that the Dr’s in the practice had just (as in that weekend) agreed to plan a course of action for diagnosing whooping cough (aka Pertussis) because the medical journals are beginning to call attention to the disease.  He said because of the vaccines, they simply don’t consider it, but the medical journals are bringing attention back to pertussis, as it’s being grossly misdiagnosed and under-reported.  I had questions, but the answers I was getting didn’t make sense to me.  After our visit, I really began researching this disease in earnest.

The information I was getting from my pediatrician, the CDC, and other mainstream sources seemed contradictory to me.  Some sources stated that infants under a year with whooping cough should be hospitalized (really?), but my doctors office didn’t seem that concerned.  What was going on here?

I became slightly obsessed with knowing more about whooping cough, so that I could make an informed choice for treating my kids, as well as for protecting others around us from being exposed to this virulent bug.  And it IS virulent…my oldest two have been vaccinated against it, and they were the first two to come down with whooping cough.

I have heard of a LOT of cases of this in the past year popping up among friends all over the U.S.  I am of the opinion that the current vaccine may be failing, but I don’t think doctors are really aware of this, nor are they equipped with good diagnostic or treatment options at this point. (We’ll discuss more on this in part II)

Now, I do enjoy research, but I’m generally not obsessive about picking apart a disease in medical textbooks and sharing it with the world.  Especially diseases like whooping cough…it sounded somewhat antiquated, mostly mild outbreaks, and I thought that there were easily available treatments.

But I discovered that whooping cough is extremely contagious; and it’s contagious before you even know you have it, and by the time you get to the doctor, the damage has already been done.  After spending some serious reading time, I feel that in this case, it’s super-important to “know thy enemy.”  Allow me to introduce you…

In a nutshell, here’s what I think every parent should be aware of in regards to whooping cough:

*People who have been immunized can still get whooping cough.
*Pertussis is most contagious when only minor cold like symptoms are present…and at that stage, it’s *extremely* contagious.

* Most cases go undiagnosed, and are uneventful…a mild persistent cough in adults and older kids (and rarely “whoops”), but the damage that whooping cough can do in young infants (under 6 months), the elderly, and those who have impaired immune systems is extremely serious and can be life threatening.

*Pertussis is often misdiagnosed or misunderstood, and incorrect information about the disease is common, even in doctors offices.

*Whooping Cough is often diagnosed after the damage is done, and is commonly overlooked as a persistent cough.  Other names for it are the “100 day cough” and “nurses cough”.

Whooping cough is the only vaccine-preventable disease on the rise in the US and it is severely under-reported.(2)  The Center for Disease Control (CDC) estimates that, at best, one out of three cases are believed to be reported (2); but other estimates place the true number of reported incidences at closer to 1 out of 10 to 1 out of 20 reported cases. (2) Those are pretty shocking stats…or better stated, a shocking lack of stats.

Imagine the impact of this in daycare centers and schools alone.

Whooping cough can actually be caused by one of three bacteria.  B. Pertussis is thought to cause 95% of the cases of whooping cough, with B Parapertussis, a milder strain, causing the other 5% of reported cases. (1)

Now, my friends, if you’re up for it, here are the cliff notes from my obsessive research plus, my own little cute illustrations, for us visual learners.  From medical textbooks, lectures, and government authorities, here’s a peek into the dirty lair of the whooping cough <dun-da-dah-dunnnn>

The Stages of Whooping Cough

Stage One: Infection and incubation
(note: many sources roll this stage in with the second stage)
Day one:  B. pertussis bacteria is inhaled and attaches itself to the mucous membranes…the infection begins.  Whooping Cough is spread by breathing in the bacteria from the discharge of an infected persons cough or sneeze. (3)
Grody.
Immediately, the bacteria begins to colonize and multiply on the cells lining the respiratory tract and airways.  The protective cell layer that lines the airways are like living velvet…they are covered in tiny hairs or cilia. The cilia move back and fort, expelling mucous, and tiny foreign particles, including invading bacteria.  But B. pertussis is magnetically attracted to these ciliated epithelial cells.  Itattaches to them and begins to silently colonize and obliterate the lining of the large airways.(4)

The incubation period lasts on average from 7-10 days, but can range from 4 to 21 days in which the person is highly contagious, but has no symptoms at all.  The pertussis bacteria never actually enters the cells or the bloodstream.  So sytemic or oral treatment is minimally helpful.  Pertussis is very effective at causing major respiratory distress.

Stage Two: The Catarrh (Inflammation & Mucuous) Stage
For approximately the past week, these quickly multiplying bacteria are coating the upper respiratory tract, and doing massive damage to the cells that line the airways.

The infected cells are exploding, pumping out toxins that damage lining of the airways, which in turn increase histamine response and mucous production, and ramps up the immune response of the host. (3)   Symptoms begin to show, but are very mild, and will mimic that of a cold, with a runny nose, mild occasional cough, and low grade fever. (4)  In our cases, only one child had a fever, and the others had very, very minor cold symptoms with an occasional cough or a sniffle. In babies, this may present as sneezes and throat clearings.

As the top layer of ciliated cells die off, the body reacts with acute inflammation and by producing large amounts of thick, sticky mucous. (1)  This stage goes on for one to two weeks. (2)

So, to sum up:
For three weeks or more, these buggers are stripping your airway of cilia, creating gunky thick mucous, you’re majorly contagious…and you may just have a minor sniffle.

I’m a visual person, so I thought I’d share a visual aid of what is happening in the first 2 phases of whooping cough.

Stage Three: The Paroxysmal (Fits) Stage
Next comes the coughing stage, which lasts from two to six weeks.  This is usually when we begin to get a clue that something is very, very wrong.  Most cases are diagnosed in this stage of the illness.

The person will present with violent fits of coughing, interspersed with deep gasps for air that can make a whooping sound.  Though, in our four cases, only one child had the classic ‘whoop’, and only did so one time.

This is where you really begin to see the damage that has been happening to the lining of the airways.  On average, the coughing fits increase in frequency during the first 1 to 2 weeks, remain at the same level for 2 to 3 weeks, decreasing gradually after this. (2)

Coughs may be hard, dry, convulsive coughs, or more croupy and rattley as mucous begins to be expelled. (6) The thick, sticky mucous is difficult to expel, and once a coughing spasm begins, it usually continues until all the air is expelled from the lungs.  It is common for the person to throw up during or just after a coughing fit. (1)
The coughing spasms can also cause a person to turn red or blue in the face (cyanotic), blood vessel ruptures in the whites of the eyes, and in some cases, cracked ribs and hernias. (1)

My little ones would literally cough all the air out of their lungs until they puked.  Every night, sometimes multiple times a night.  For weeks.

The pertussis bacteria puts off a toxin that causes an increased histamine response, which means that the respiratory tract overreacts easily, triggering these major coughing fits.(3)  The coughing spells average about 15 times in a 24 hour period, and occur most commonly at night, which results in fitful sleep (understatement of the year).(1)

Other activities such as eating or laying down can also cause coughing spells to occur.  For my 6 1/2 month old, pretty much all of his normal activity triggered cough spells: rolling over, laying on his tummy, drooling, putting things in his mouth, burping, and nursing.  It was heart wrenching.

The crazy thing is, between coughing fits, the person seems perfectly normal, and feels fine.  Which is part of the reason why this so often goes undiagnosed…the child doesn’t look or feel sick unless they start coughing, and, of course, they never, ever have a coughing fit at the doctors’ office.  In adults, whooping coughing may just seem to be a mild, persistent cough.  The “whoop” is uncommon in adults. (2)

Stage Four: Recovery or convalescent phase
The final stage is the recovery period, which can take up to six months.  Coughing fits begin to happen with less frequently and duration. (3) The lungs recover slowly, and the person is more susceptible to secondary infections because the protective cilia layer is gone.  Infections that do develop afterwards are going to stimulate similar coughing fits.

So, now you may know more about pertussis than your average nurse practitioner.  It’s some scary stuff.

I had more questions…What can be done about it?  How dangerous is it, and how do you treat it?
Fear not, my friends…we’ll look at these questions and more in the very next post:

Note: this study was funded by the “largest company in
the world devoted entirely to human vaccines.”  Just so you know.

3.  Essentials of Immunology and Serology, By Jacqueline Stanley, 2002  http://tiny.cc/n89sh

6.  Whooping-cough; its pathology and treatment, By Thomas Michael Dolan, 1882  http://tinyurl.com/2asybrq
(obviously, very inaccurate with regards to pathology, but interesting in
regards to immunity and history of the disease)